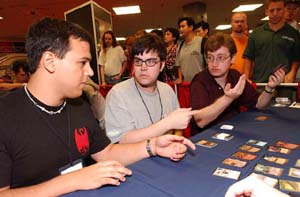 A United States National Champion. A player with more Grand Prix Top 8 finishes than anyone else in the world. A Pro Tour Champion. Is this the resume of a team to fear? Absolutely. Justin Gary, Alex Shvartsman and Zvi Mowshowitz went on a tear this weekend, and now find themselves ready for the Top 4. With their past individual success and an obvious ability to work well together, this team has shown that they have what it takes to win it all on Sunday.

The team's original name was "My Team Part 17", which was a parody of Zvi's now infamous eight part series on Fires. Now that they find themselves in the Top 4, Justin, Alex and Zvi decided they needed a more serious name, and became "Illuminati". Why that name? Gary explained, "Now Illuminati appears on the top of the standings out of nowhere!" I asked them their draft strategy, and Zvi shot back "The Illuminati says 'No comment'. You're not cleared for that information."

For Zvi, an impressive finish is just another day at the office. This is his fourth appearance on Sunday at a Pro Tour, and he has high expectations for tomorrow. "Two down (Pro Tour victories), one behind Kai." This is Justin Gary's second Pro Tour Top 8, but the real story has to deal with Alex Shvartsman. He has had an incredible amount of success on the Grand Prix circuit, but many critics felt that he had not proven himself entirely since he never made Top 8 at a Pro Tour. Alex commented, "It feels great of course . . . except now people will say that I couldn't have done it at an individual Pro Tour!" He is optimistic about his chances, but is happy to be in the moment. "It would be nice to be a Pro Tour Champion, but the Pro Tour Top 4 legitimizes me. These guys (Gary and Mowshowitz) are old hands at this."

Glory is definitely something to revel in, but the economic impact of this weekend's performance is what really has Illuminati excited. This tournament will give Shvartsman and Gary the Pro Tour points necessary to be on the Masters Series. Gary joked around a bit and let out a "Mo' money! Mo' money!", followed by a Mr. Burns-ish "Excellent." Zvi simply added, "I'm already on the Masters!"

So what are the expectations for tomorrow? Alex commented, "I'm feeling pretty good about our chances", and Gary added "There's a lot of good teams, but we're ready. There's the Pro Tour Player of the Year, and last year's finalist." Judging by their past individual accomplishments and their performance as a unit, it's safe to say that Illuminati has a good shot at winning it all.