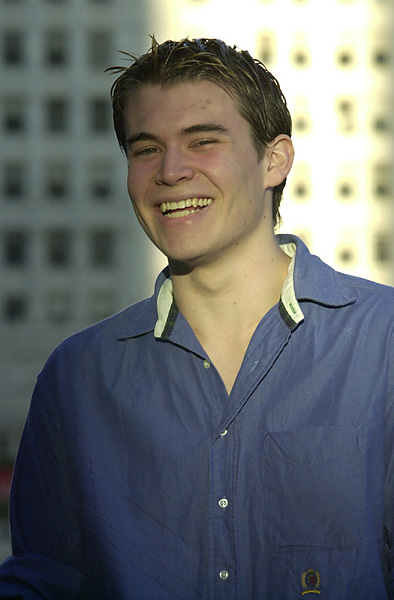 When I first approached Brian for an interview he was deeply engrossed in describing just how thoroughly he "smashed" his first round opponent today. "...Third turn Natural Order for Verdant Force, fourth turn Cloak and he just stuck out his hand for a shake and conceded!" Kibler's face was lit up and you could see the love of the game written all over his face.

Brian decided to play with his signature card: Rith, the Awakener. He won his first game today in the Extended portion of Worlds with an Armadillo Cloak on his Dragon. "You should have seen it, I was giggling the whole first game when Rith was on the board with Cloak on him." Other highlights of this deck are Gargantuan Gorilla, Masticores, and Woodripper.

"I want to play Stompy decks and Sligh decks all day, then I'll 6-0." Brian expects that there will be a lot of these two decks around, especially down in his bracket of the standings. "My sideboard is all devoted to control decks, so I should be fine."

After a 5-win, 7-loss record in the previous two days, he explained that he just wanted to have fun today with a deck that he enjoys playing. "I am disappointed with my performance the last two days, so I decided to have fun today and play this deck." This deck was a last minute decision, I actually ran across Kibler last night while he was throwing together this deck, and getting all the cards he needed.

Brian Kibler has been around the Pro Tour for quite a few years, with a third place finish at Pro Tour-Chicago (with Rith and Cloak) last season and he won first place at Grand Prix-Toronto in 1997 (Mirage/Visions/Weatherlight Block). His friends and other Pro Tour Names trust Brian's opinions when it comes to decks, tech, and metagame choices. "Kibler's smart, open-minded, and works really hard," says Ben Rubin, Brian's friend and playtest partner. Ben Ronaldson, another noted playtester commented that "Brian's very intuitive and he's a good deck builder, however, he's very stubborn and single-minded when it comes to beatdown decks." Ben went on to explain that Alex Shvartsman, Sigurd Eskeland, and Gary Wise basically hired himself and Brian to playtest for and with them for the Master's series in Barcelona.

Aside from competitive Magic, Kibler is in his junior year at Emory University in Atlanta, GA, majoring in Philosophy. He's also a writer for the Sideboard, "I've got a weekly column about deck technology." Since Kibler lives at home in New Hampshire and goes to school in Georgia, I asked if he played much in the Atlanta scene: "I rarely play in Atlanta; I do most of my gaming online."

Kibler is qualified through Pro Tour-New Orleans, so he figures he'll be defining the Extended format for New Orleans today by going undefeated. Since Kibler hasn't won any of the premiere events this year, he's not currently invited to the Invitational . . . but he's been actively seeking votes to get in through the player's ballot.