Interview with the Champions: Potato Nation 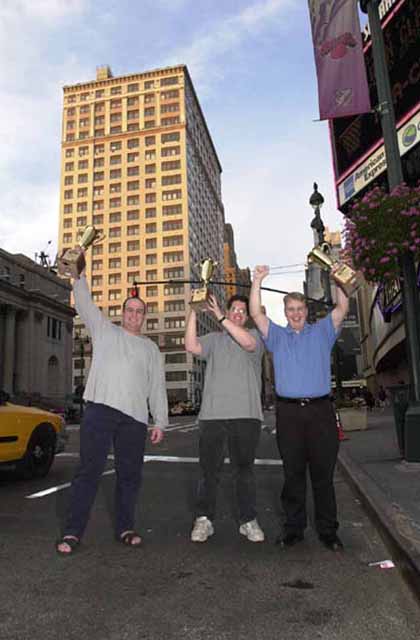 "It is such a relief to win a Top 8. This is one of the most amazing days of my life," Scott Johns almost whispers. After an agonizing match against Andrew Johnson and the Car Acrobatic Team, Scott and Potato Nation could lift the trophies as 2000 Team Pro Tour New York Champions. "I've been close to many times, this is my fifth top 8. To finally get the monkeys off my back..."

When Potato Nation faced Car Acrobatic Team (CAT) in the finals of the Team Pro Tour, four playtest partners sat down to play each other. CAT all hails from Pittsburgh, and Turian, Johnson's roomie, tested a lot with them before the tournament. "Mike is the best player in the format. He is so good at keeping track of everything," Aaron Forsythe says. In the test drafts, Mike picked for his whole team, which gave him a lot of practice that came in handy in the Pro Tour. Over the course of the tournament, Potato Nation didn't lose a single match. And CAT didn't lose to anyone but Potato Nation.

The Potato Nation team members all emphasized the teamwork. Gary, Scott and Mike are good friends and have been so for a long, long time. "Turian is one of my best friends in Magic. It is great to be able to share with him," Gary Wise says. Wise was, like Johns, relieved when their victory was clear. The Team Pro Tour was his 23rd Tour, and although he has had one Top 8 (at 1999 Worlds), Gary sometimes felt that he didn't had the natural talent to win. However, he blew both his opponents away in the playoff, and they were both players that he respect. "Aaron was the only one who beat me all weekend," Gary says, but adds "I think my mother could have played my deck and won. It was pretty good."

While Potato Nation felt relief, Aaron Forsythe was a bit disappointed after losing in the finals. "When the initial agony of the defeat is over, I'm sure I will be thrilled. I can't be disappointed with second, but it is hard to come so close and not achieve the ultimate goal," he admits. But the second place finish made his team 30,000 dollars richer, and it also gave the team members several important Pro Tour points. "And maybe respect," Forsythe adds.

Mike Turian found it a bit weird to suddenly face his playtest partners in the finals. "I really wanted us to win, but I knew that if they won I'd be happy for them. So I had to get psyched up before the match. It is hard beating your friends, and I'm glad I didn't have to finish my match with Cuneo," he admits. Both Gary Wise and Scott Johns managed to win before him, so his match didn't mean anything. But Turian reveals that it was nerve-wrecking to sit on the stage waiting for the match between Johns and Johnson to finish. "They told us we shouldn't look over, but you just can't help doing it," he smiles.

Now, all of the finalists will go on to play in the Pro Tours, and several of them will also be qualified for the Masters. Except for Andrew Cuneo. "Andrew qualifies for Pro Tours and then he doesn't go to them," Johnson explains. But Cuneo doesn't really know yet. "I might go to Chicago..." he says.