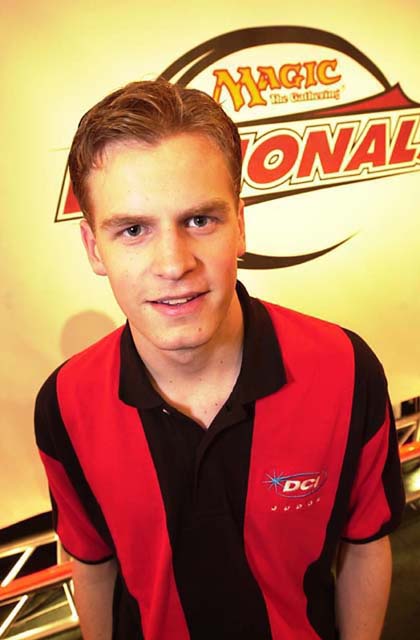 With announced Head Judge Chris Zantides absent, Collin Jackson, a student as Yale, was the only level IV judge available to work US Nats, and he inherited the job of head judge for the tournament. Collin was the tournament's head judge last year, and he also held the position at PTLA.

Sideboard: Today, you have the Herculean task of head judging "the toughest tournament of the year".
Collin Jackson: I'm just glad I don't have to play in it.

Sideboard: Do you think this title is earned?
Collin Jackson: Yeah, I mean, its pretty tough field out there, and I'll certainly be very impressed with whoever manages to make it out on top.

Sideboard: So, how have things been going today?
Collin Jackson: Overall, this tournament's run smoothly. The biggest problem we've been having is with players and deck lists, as opposed to player interaction problems. While its unfortunate that players are receiving game and match losses for deck list errors, it's much easier to handle than an argument between two players.

Sideboard: Tell me what goes through your head when you have to break the news to a player that their clerical error has cost them a game or match they've worked so hard for.
Collin Jackson: Well, what I often do is show them the penalty guidelines, and that seems to make them more comfortable since they're getting a more uniform penalty. Usually, a player will realize it is their own fault and they'll learn for next time to be more careful.

Sideboard: There are a number of worthy candidates for the position of US Nationals head judge. What credentials do you bring to the table that convinced Organized Play to select you for the task?
Collin Jackson: I wish I could say it was my superior judging qualities, but the truth is it was supposed to be Chris Zantides, but he got deported to Australia! I was the only other level 4 in the building at the time, so the job fell to me.

Sideboard: Normally, you're a student at Yale. Does your being here mean you're off for the summer?
Collin Jackson: That's right. I'm working for the DCI for the summer on judge testing and the development of new rules for the game.

Sideboard: So in other words, you're getting paid to play in the office?
Collin Jackson: Yeah, pretty much.

Sideboard: How are you finding your playing skills with regards to how they match up with your "co-workers"?
Collin Jackson: I haven't won a match yet in the Future Future League.

Sideboard: So in other words, we should refer to you as a judging specialist?
Collin Jackson: Sounds good to me.

Sideboard: So, back to Nationals, who has impressed you in the tournament thus far?
Collin Jackson: Honestly, I'd have to look at the standings. I've been too busy judging to pay attention to who's winning

Sideboard: who was your pre-tournament favorite?
Collin Jackson: Based on my experience in asking who the best in the world is, I'd have to say Jon Finkel. Besides, how good does 'repeat US Champion' look on your resume?

Sideboard: Okay, everyone always says Finkel. Who is your sporting choice?
Collin Jackson: What does sporting mean?

Sideboard: Basically, not Finkel
Collin Jackson: Well, I've been doing tournaments ever since I was a lowly Level 1 at the now defunct Wizards game center. Chris Benafel has always had the drive to win, so I think he has what it takes to take it all.

Sideboard: Do you think he wants it more than most after coming so close last year?
Collin Jackson: Absolutely. I think he has nightmares about Persecute.

Sideboard: Switching topics for a moment, your colleague James Lee made a number of comments in an interview similar to this one about JSS competitors having more appreciation and respect than Pro Tour players for this game. Do you agree?
Collin Jackson: I think most JSS players are in awe not only of their surroundings but the judges as well, which will happen when kids relate to adults. The PT players have had more ample opportunities to develop a level of confidence that allows them to question those authority figures. I think the PT players still love the game, but sometimes their will gets in the way.

Sideboard: Lastly, I understand you've been engaging in terrorist activities in Seattle?
Collin Jackson: I've had my share of tear gas

Sideboard: What happened?
Collin Jackson: I was actually protecting Niketown (the Nike mega store in Seattle) from other rioters. Things were getting pretty crazy in the WTO riots in Seattle and there was a lot of fighting and broken glass. I don't really have any strong feelings about the issue, so I was just there for the ride. We got charged by the police and they threw a lot of tear gas at us to get us to move and stop us from looting, so I ran away and wrote some judge tests.

Sideboard: Great. Thanks very much for your time; please don't attack us
Collin Jackson: No guarantees.