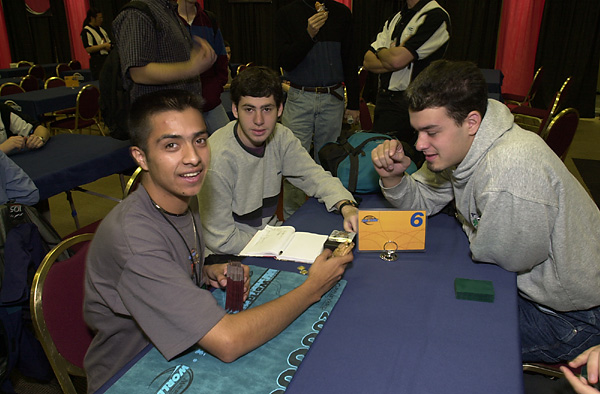 Gerardo Godinez from Neza, Mexico was a rather unknown name for most Magic players until he got an invitation to play in the 2000 Magic Invitational. However, he has been one of Mexico's finest players for a long time, and 2000 Pro Tour Chicago is his 15th Pro Tour. "People still don't recognize me," Godinez smiles. "They sit down and think 'oh, it's a Mexican; he must be a scrub.' But I like that. They get overconfident and I win, and they can't believe that they lost to me."

Godinez is far from a scrub. He started playing Magic back in 1996, when Mirage was the most current set. "My friends forced me to play," he says, explaining that the Mexican National Champion was one of the players who taught him how to play. However, Godinez enjoyed the game a lot. He liked the strategy and the competition, and he got to travel and meet people. "It makes me proud to be good at it," Gerardo says.

Before Chicago, Godinez's best Pro Tour result was finishing 54th at 1999 Worlds. However, he was been close to making the second day multiple times although this is the first time he has made it. Before the last three rounds he had an 8-2-1 record, and he needed to go 2-1 in order to become the first ever South American player to break into the top 8. Unfortunately, he didn't go the whole distance. However, he still finished at a very respectable 17th, just missing the Top 16.

"We made a good metagame deck," Godinez thinks. He and five other Mexican players chose to go with Blue Skies with four Wash Outs and two Boomerangs main deck. "Damian Brown-Santirso designed the deck. We knew we'd be meeting rebels and a lot of Fires decks, and the deck just seems to beat it. Besides, our deck type wasn't expected, so people didn't sideboard against it."

Godinez believes that the Magic Invitational was what sent him to the second day of Pro Tour Chicago. "It inspired me, and brought me luck. I just came from a Top 32 performance in Buenos Aires," he smiles, hoping for the good streak to continue. When he first got the invitation to the Invitational, Gerardo was really happy. "It felt amazing, I felt like I was getting something although I hadn't done what everybody else in the Invitational had. I finally got to play with good people in an environment such as a playoff," he says. The 21-year old was never nervous when facing Magic's top profiles. He had a lot of fun, especially when he beat Jon Finkel. In the end, he ended up as number eight out of 16 players, a respectable finish that perhaps few would have expected from him.

"Random Mexican" is a rather common term in the Magic lingo. Straight out, it means a scrub, and Gerardo doesn't like it a lot. "It has a mentality of superiority that I don't like," he says. That said, he knows that the general level of play in Mexico is rather mediocre, although he points out that there are a few players in the country that can compete on the top level of play.

Gerardo's goal is to win a Pro Tour and get a big check. He figures that his strengths as a player are concentration and experience. "I play and practice every day, and I spent a lot of time playtesting," he reveals. As far as he knows, he doesn't have any particular weaknesses, although he tries to work on a few things such as the ability to get the most out of every single play. And who knows, maybe one day Gerardo will make it to the top 8 as the first Latin American player. "I would be very happy, and then I would have to thank my team and everybody who has supported me these last years," Gerardo says. And does he believe that he can make the Top 8? "Absolutely."