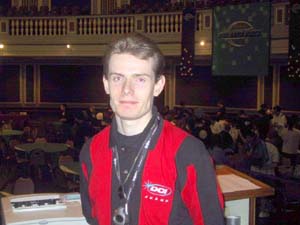 Chris Zantides, ex-Sydney resident and ex-Australian Organized Play manager, was penciled in as head judge for Grand Prix Brisbane. Unfortunately Zantides's new job at Wizards of the Coast, helping to stop the spread of cheaters and fight for the common good of all honest magic players in the world, had kept him too busy to take the long flight down to Australia from Seattle. Instead, 26 year old Rune Horvik, from Oslo, Norway, a level three judge, was lucky enough to be called up to be the number one judge at the Grand Prix, and at the same time enjoy the great weather Brisbane had to offer.

One of the most common questions players ask of judges, besides rulings during play, is why they want to be a judge when they could be playing magic instead. With the level of rules knowledge judges maintain, especially level 3 judges such as Rune, you would think they would have a great advantage over normal everyday players. Rune responded to this question with an almost poetic reply: "I enjoy organizing things. I especially enjoy organizing events where people are going to have fun. It's just excellent to see a couple of hundred people having a great time and playing cards. When they have fun, I have fun".

So was Rune a player before he became a judge? "I considered myself to be a medium player. I liked to travel around to play in events, but I don't have any outstanding results" commented Rune. Rune's is most proud of his performance at GP Birmingham, where he nearly made day two, placing 66th. He also mentions a couple of PTQ top 8s as significant achievements in his career as a Magic player. 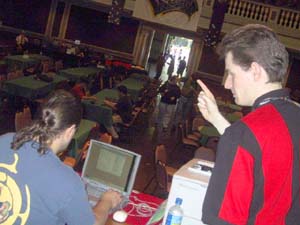 However when Rune was asked why he decided to become a judge you realize how important he is to Oslo Magic and how self sacrificing a person he is "There weren't any other judges in the area, so I decided to become one. Without judges you don't have a competitive magic scene, so someone had to step up and move from player to organizer and judge". What keeps Rune motivated? Well as a level three judge he is one of the top judges, however Rune believes there should be more level fours "I am trying for level four. There is a need for levels fours so they can help make more level threes". You have to wonder though, as really there are very few extra perks for judges at higher levels. "No, there aren't a lot (perks). I get more support to get more work. But I enjoy the work, so it's not a bad thing".

When not judging events Rune works as Organized Play manager for Norway, helping to organize PTQs, and act as the general customer support contact for Wizards of the Coast in Norway. "Retailers, wholesalers, anyone who has a question about Magic in Norway contacts me. I don't actually work for Wizards directly, I work for a distributor called Midguaard".

During Grand Prix Brisbane some of the players had a unique method for determining who went first. They would fold their score sheets into paper airplanes, jump on the stage and throw them. The owner of the plane that went the farthest would choose who went first. Rune had no problems with this unusual dice role "It's an interesting method to determine who starts. These players are having a good time, and I like to see that, as long as it doesn't get out of hand. Fun but professional is the image I try to enforce".