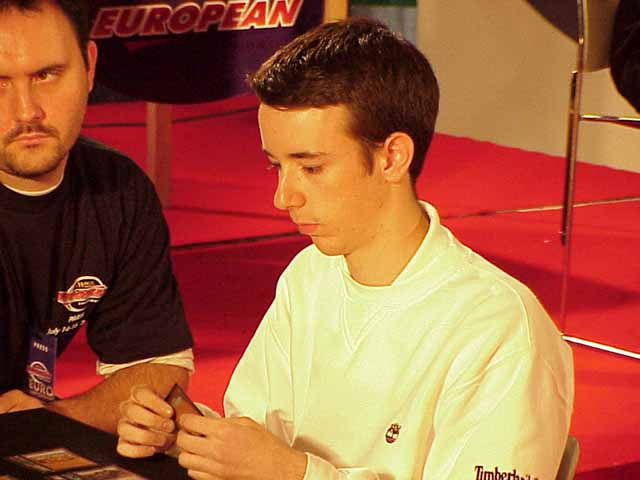 Loic Dobrigna was 4-2 after the draft portion of this event, and he needed to go undefeated the next day in order to assure a spot in the finals.

"I asked myself, 'What deck could go 6-0?'" the Frenchman recounted. "I needed something that could beat Replenish, Trinity Green, and Angry Hermit, which were the dominant decks in the European metagame."

"The choice was clear: I would play monoblue. I knew that I'd get crushed by suicide black, Stompy, and white weenie, but if I could avoid them, I'd be set."

Indeed, Dobrigna's predictions about the metagame were correct, and he luckily avoided fast creature decks for the first five rounds of the day. After taking an intentional draw in the final round, he made it into the top eight.

The Paris native was crestfallen, however, when he found out that he would play a white Rebel deck on Sunday. "It's very unlikely that I will win," he sighed. "It's possible that I could get lucky and win two games, but a best 3-of-5 match is bad news for me. I probably have a 30% chance to advance."

Nevertheless, Dobrigna is happy to have gotten this far. "No matter what happens tomorrow, I'm very excited to have made it into the top eight of such a prestigious event," he stated. "And any money that I win will be much appreciated."