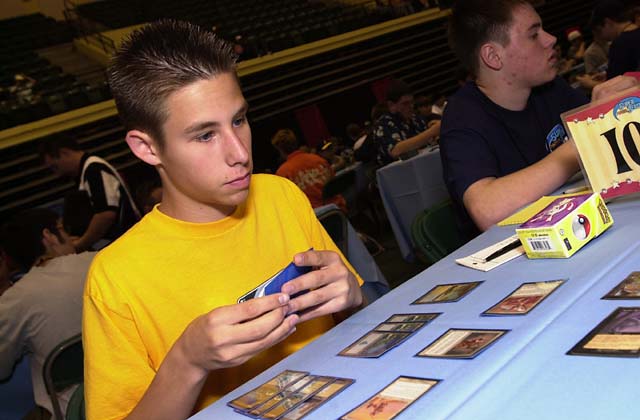 If you're looking for a game face among the 375 player crowd in this year's Junior Super Series, one need look no further than Californian Scott Freeman. While some players like to slump in their chairs, laugh aloud or chat it up, this kid brings to the table a stone cold stare and attitude to match. Scott Freeman isn't here to make friends: he's here to take names.

The competition of the JSS is nothing new to this Oak Park, California native. Long before he was introduced to Magic, Scott was playing competitive Basketball and Baseball, as he does to this day. "I don't really follow either," says Scott, fifteen "I just play."

The same could be said for Scott as a Magic player. Introduced to the game three years ago, Freeman leapt right into the competitive formats, Standard and Draft. At the time, half the guys in his grade were playing Magic, but now he's the only one left. "I still talk to my good friends about Magic, but that's about it. They're pretty impressed at the kind of money I'm making".

As well they should be. Scott has dominated the JSS Challenge circuit in California, where he's won an amazing four tournaments, taking home $1000 in scholarship money for each of them. In the final of two of them, he played his friend Spencer Russo, but there was no thought of a prize split: freeman plays to win.

"I've been doing a lot of playing with the top players in the area like Peter Szigeti. I'm not quite winning 50% against all of them, but I feel myself improving." Scott doesn't credit these sessions with his success so much though he does feel he benefits from playing with a large assortment of players "I do a lot of drafting online. Netdraft has been a really good way for me to get better."

With his sixteenth birthday approaching in February, the 9th grader knows his time on JSS is limited. With six JSS Challenges in his area before then, he's guessing he has one more year in the sun. "After that, I'm going to start on the PTQs" says Scott 'I think I'm getting better, so by then I should be ready to take those guys on" This means the rest of California has around 18 months to get ready: that means that they'll have ample time to get ready for that stone cold stare.