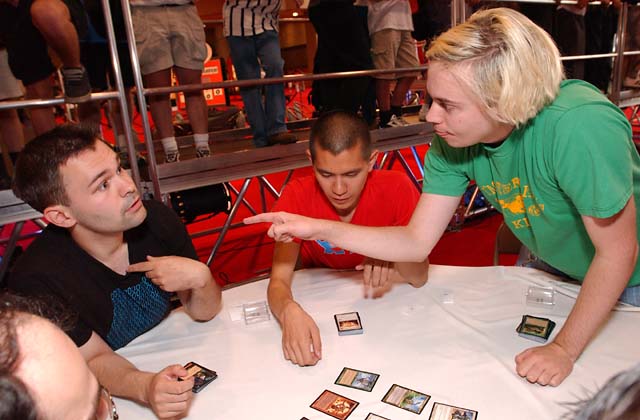 With three rounds left to play, the Swedish and Hungarian National Teams are at the top of the standings, forcing the long-time favorite United States to play catch-up. The play schedule is rather exhausting, and players do not generally have the time for an in-depth interview, but I was able to get a few quick comments from members of the Swedish national team.

Johan Johannesson became the national champion this year by winning a Fires mirror match against the defending champion Jimmy Oman. Twenty-six year old Johannesson has been playing the game since 1997, when he graduated to Magic from a variety of board games he used to play.

Johannesson's opponent Jimmy Oman is probably the best-known member of the Swedish National Team. One of very few player to have won Nationals twice, he was all set for a three-peat this year. He was given an option of playing best of three or best of five games, and chose to play best of five. He was disappointed to lose the match after starting it with a 2-1 lead. Oman is twenty-five years old and works in the advertising industry. He had a daughter just six weeks ago, which made him skip European Championships. Oman does not play on the Pro Tour as he does not have the time he would then have to dedicate to Magic, but always competes in National Championships. He also played in Grand Prix-Gothenburg (his home town) and earned a Top 8 finish.

Thomas Rosholm is the source of tech for his teammates. He is a member of team Punisher, which provided the Swedes with their Constructed decks for this tournament. Punisher is a team that unites some of the pro players from Finland and Sweden, and includes some of the well-known competitors from that region such as Tomi Walamies and Jens Thoren. It was Rosholm who designed the Dromar-Go deck that placed three players into the Top 8 of European Championships a month ago. Punisher members updated the deck for Worlds, and provided it to Rosholm's teammates.

Swedish players secured their place at the top of the standings by having all three team members perform well, though not amazing throughout the three days of play. Johannesson is the only one of the three to have won money - by finishing exactly sixty fourth. His teammates had similar records, but weaker tiebreakers, and both finished around 70th-80th place. They proceeded to win the first match against Spain 3-0, earning 27 points to jump ahead of several other teams. At the time this interview took place, the team just finished drafting against Hungary and its members feel that they will win the match 2-1. When asked about their chances to win the title, Oman felt very optimistic: "We have at least a 50% chance of finishing in the finals."