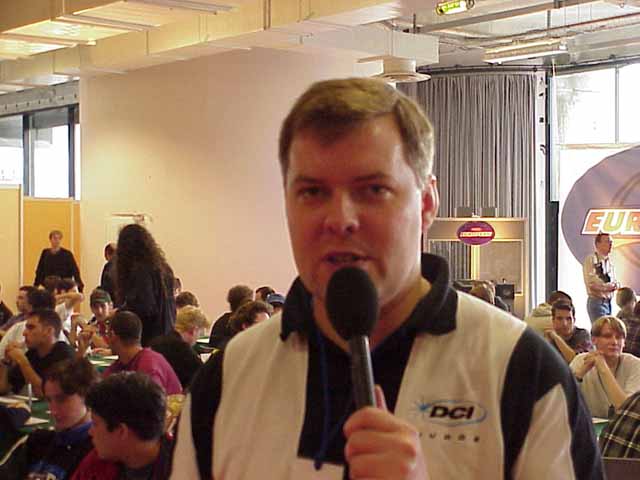 European Championships head judge Thomas Bisballe is a well-known presence around the tournament scene in Europe. Having head judged 10+ large tournaments (Grand Prix, National Championships, etc.) he is one of the more experienced members of the DCI.

30 year old Bisballe works for the Magic distributor in Denmark as an Organized Play manager. He is currently one of the very few level 4 judges in Europe.

Although Bisballe joined the DCI judge program at almost its very beginning, he has been judging tournaments well before then. "I started out as a player. I got tired of the situation pretty quickly - people often misunderstood the rules and did not have a really good place to turn to in order to learn them better. I started learning the rules, organizing and judging tournaments."

Bisballe is considered by many to be rather harsh when it comes to enforcing the rules. He does not disagree. "I always make sure to remain consistent in my rulings, be neutral toward the players and apply the rules similarly in all situations. I would not call myself lenient however."

Bisballe has a generally good impression of this weekend. He feels that there has been a lot less trouble with the language barrier than last year. Players generally behaved themselves very well and showed more respect for the rules. The most common rules questions involved the Rhystic abilities. Those are generally not very well understood - most players have trouble with when one must pay, or decline to pay, for the ability.

Bisballe offers some advice to those players who want to learn the rules and tournament conduct better: "If you have a question ask a judge, not a pro player. Many players understand the rules well enough to play the game correctly, but not well enough to explain how and why certain tricky effects work. An experienced judge is far more likely to offer you a satisfactory answer."

When asked about any parts of the DCI Judge program he would like to see improved, Bisballe explained that more social interaction between judges is needed. "Many judges who come out to work at events like this one do not benefit fully. During the event itself everyone is too busy to really reflect on what is going on, ask questions and otherwise learn. It would be nice if at a major event someone was assigned as a social coordinator, to make sure that the judges get the chance to interact more. For example, they might go out for food and drinks in the evening after the event and talk, sharing the experiences of that day. Otherwise some of the shy judges might spend their evening hanging out in the hotel room and get less out of the experience."

Would Bisballe like to add anything at all? When asked that, he simply wanted to say Hello to his family back at home.