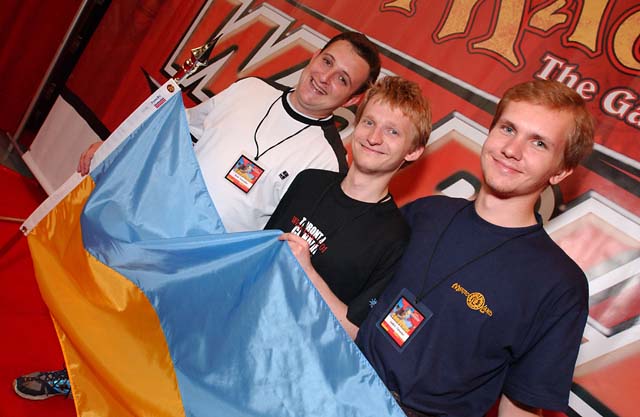 Like much about the life in former USSR, playing Magic at the highest levels there is a struggle. Economic conditions prevent much of the populace that might be interested in the game from playing it, and those who do play Magic are often unable to travel outside of their country to compete on the Pro Tour.

Despite the setbacks, players from the former USSR have enjoyed some success in the tournament scene. Russia was represented at the World Championship in 1999 and 2000, and its players traveled to a number of European Pro Tours. Ukraine actually placed a player in Top 8 of PT Chicago earlier this year. Ukraine is also the only former Soviet Republic represented at Worlds this year.

National team member Boris Zlotoiabko is a manager of Magic Land, one of the two Magic clubs in Kiev. The club has helped a number of players attend events outside of the country in the past. "Once every few months," tells Zlotoiabko, "we hold a large two-day long tournament that challenges players to compete in several different formats. The winners are awarded with travel money. We've had players attend GP-Moscow and GP-Prague this way, and will help players travel to GP-Warsaw in a month."

Financial considerations are not the only barrier erected between Ukrainian players. It is often difficult for them to obtain travel visas to United States or Canada - especially for young, single players who seemingly do not have much keeping them in their country. The North American governments are wary of people coming over and choosing to remain in the country illegally, thus legitimate travelers like the National team this year have to struggle to obtain permission to enter the country. It took a written invite from Pro Tour Player Coordinator Andy Heckt and confirmation from Sargona - the Magic product distributor in Russia and Ukraine, for their visas to be issued.

A year ago, Andrey Rybalchenko, who incidentally is here this weekend as a judge, was invited to an American embassy for an interview, in order to obtain travel documents to attend Pro Tour-Los Angeles. He prepared to give a brief explanation of what it is he wanted to go to Los Angeles for, but the response was quite different from what he expected. "You play Magic," inquired the consul. "Well, stop by with your deck."

Surprised, Andrey borrowed a friend's Stompy deck and went to the Embassy. The consul has been playing Magic since around the time Legends was released and was a casual player to the bone - Andrey destroyed his Nicol Bolas deck a number of times. Needless to say, he did not have a problem obtaining travel papers that time around. Since then, the consul has been occasionally playing at Magic Land.

Back to the matter at hand, Ukraine is represented by the full contingent of its top 3 players this year. National champion is computer programmer Artem Kozachuk, who defeated economics student Andrey Gubachev is a u-w on u-b control match.

The team has not spent a great deal of time practicing for the event. They played different decks in all formats, although they did playtest together. They also weren't familiar with Team Rochester draft very much. Artem got a chance to practice a bit by teaming up with Brian Davis and I against the mixed team of Israeli and United Arab Emirates players. The players from all three countries wanted to get at least some practice in before competing in such a skill-intensive format.

The lack of practice did not seem to hold the Ukrainian players back. They are on a tear, having defeated Thailand 2-1 in the first round and then swept England and Denmark 3-0 each. Partly responsible for their success is Kozachuk's ability to open broken cards. Against England, his deck included a pair of Nemata, Grove Guardians, a Ghitu Fire and Pernicious Deed. Against Denmark he opened Rith, the Awakener, Magma Burst, and Flametongue Kavu. "My draws have been poor throughout the week, so luck is making up for it now," said Kozachuk.

With a single round of Swiss play remaining, Ukraine will need to sweep their opponents 3-0 to have a chance of placing in the Top 4. Having won their first three matches, the team is a lot more confident now and is looking forward to the final round. "Maybe we'll get to play against the French team," they say. "They have really cool shirts."