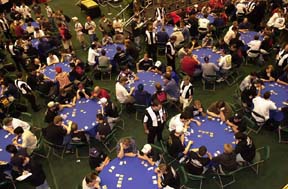 The competitors draft to start the tournament

Each year, the debate rages: what is the toughest tournament of the year? There's Worlds, which, while definitely the most prestigious, includes a number of players from less developed countries, magically speaking. There's the Invitational, which has the strongest players in the world without any weaklings to prey upon. There's each of the Individual Pro Tours, where one must go through a gauntlet of seventeen excruciating matches to come out on top, and there's the still new Masters, where thirty-two of the best go head to head, all coming away with smiles on their faces.

With all due respect to those tournaments, until someone proves otherwise, the jury still says that the answer is the United States National Championships. For years, America's finest have gathered to go to war over four spots on their National team, for the last few, with many thousands of dollars at stake. With every player coming from a country that has had the game for seven years, there are very few easy matches at US Nationals, so the one hope for those attending was that with only the top four getting money, some players might decide that its not worth the work, weakening the field just a little. Now, that hope is gone.

As National Championships become more and more like Pro Tours, the United States with all its top tier stars leads the way. While the money up top is still just as lucrative as years past, with first place being worth $25,000, now, instead of the money passing down four spots like it always has, this year the Top 25 finishers will be rewarded for their efforts with more than just laurels.

Don't forget, money isn't the only thing these guys are playing for. The United States has won the World Team competition every year but one, so there's a legacy to uphold. The eventual winner will follow in the footsteps of such greats as Jon Finkel, Kyle Rose, Justin Gary and Matt Linde, the last four winners, while all three eventual members of the team will have the honor of representing their country while being watched by the eyes of the world. In a country where patriotism is side by side with baseball and apple pie, that's pretty big deal.

Playing a combination of Invasion-Planeshift Rochester Draft and a Standard format that has in recent weeks seen monoblue Magpie, Orbosition and CounterRebel win major National Championships in a field bristling with Fires and Haups decks, the Americans must now solve the riddle of which deck is the ticket to victory. Perhaps it is the player who answers the riddle who will come out victorious. Here's a look at a few of those who show the highest potential to do so:

Jon Finkel - Well, you all know what you need to know about this guy. You know about the nine Top 8s, the PT win on American soil (New York), the Player of the Year title, the spot on the National team three years ago, the National Championship last year, the World Championship in Belgium, the Invitational win in Sydney, the team success with Antarctica, the saving of children from burning houses, the ending of famine in Africa and the establishment of world peace. Basically, all that remains for Jon is to continue cementing his spot as the top Magic player. What better place to do that than US Nationals, where he has a chance to not only become the first two-time winner, but also become the first to win two US Championships back to back. With anyone else, talking like this would be ridiculous speculation. With Jon, it's almost fact, especially with neither Kai Budde or Kamiel Cornelisson, who have been giving Jon a push as of late, being eligible for the tournament.

Chris Benafel - Chris has only been on the professional scene for a year and a half, but it's been a pretty good run. First there was the second place finish at PT-LA 2000, then the second place finish at Nationals last year. After that, there was the team win at Worlds, the victory at GP Amsterdam, the Masters win in Tokyo and other successes. While Chris obviously had a great tournament last year, it ended on a sour note with Finkel not only annihilating him in the final, but also mocking him while he did so. Benafel's enthusiasm for the game combined with that memory and as poised an approach to the game as anyone on Tour makes him a force to be reckoned with this time around.

Ben Rubin - Nationals has to be considered Ben's worst tournament. He's never come close to making the Top 8, and last year, on the verge of the tournament, he found himself being rushed to the hospital as a result of him and fellow Californian Brian Hacker both going up for the same rebound in a game of basketball, only to have Brian's elbow smash Ben's mouth, with his front tooth being the casualty. Now, tooth fixed and two Masters wins in tow, Ben seems poised to make a real run at his first National team.

Kyle Rose - With a Pro Tour Championship, a National title and three other PT Top 8's, Big Erhnam is often overlooked as one of the greats of the game, but not in this column. Nationals is his tournament, with the win coming after he designed the deck that Matt Linde won the title with and before another Top 8 finish at last year's event. Big Kyle, an expert deck builder, doesn't play as much as he used to, but no one can dispute the amazing success he's had at Nats, and his recent Top 8 finish in LA shows he still has what it takes to succeed in high-level play.

Mike Long - One of the dominant players at US Nationals past, Mike Long failed to qualify for this year's event. Many people are asking the question: Is Mike Long done?

Aaron Forsythe - Can Aaron do it again? Last year, the consistent but not well known Forsythe designed the deck, Angry Hermit, that he and Mike Turian piloted to Top 8 finishes and which then went on to win both the APAC and Latin American Championships. This year, playing in a firmly established environment, it will be interesting to see if Aaron can either design or play his way to another National team spot. His success in New York and Belgium this year would suggest he's more than capable.

Zvi Mowshowitz and Scott Johns - Now that both Zvi and Scott have won Pro Tours, they have to be included in any list like this one. This tandem, who have built some of the best decks in recent memory, have been hard at work trying to find the chink in the Standard format's armor that will give them the edge on their opposition. If they achieve their goal, one-or both-could find themselves on the National team. If that happens, may the world beware.