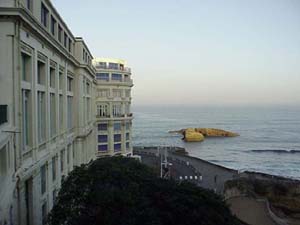 For the last European Grand Prix of the season we saved a very special venue. Located on the Atlantic coast of France (more precisely in the southern corner of the Bay of Biscay), Biarritz stretched from a quiet fishing village to a fashionable resort favored by Napoleon III in the late nineteenth century and is now an unavoidable mainstay in any international surfing circuit.

Biarritz' adapting stance throughout the years seems a perfect fit for the closure of the Odyssey Limited qualifying season. This is the last big chance for players to qualify for Pro Tour San Diego and the central location of the venue will surely drag players from the Iberian Peninsula, Italy and northern Europe.

Usually the fact that the season is ending means players have their plans all sorted out. At this point last year black-red-blue was the Holy Grail of Invasion drafting. This time around, however, it's a totally different story. The only thing players seem to agree on is that you should avoid black at almost all costs. Apart from that arguments go on and on about what colors have the strongest pool.

The season kicked of with German Stephan Meyer's victory in Vienna where the brand new set seemed to point green as its ex-libris. A full continent away Australian Ben "TBS" Seck won the first-ever major event in Africa (Grand Prix Cape Town) while the top players were squaring of in the Invitational at the same venue.

A week later we had another double feature with Grand Prix Shizuoka and Grand Prix Montreal. In Japan the local players continued their dominance of the Pacific Rim allowing only Olivier Ruel to squeeze into the Top 8. The Top 8 table being nearly full of Japanese players, kept the title home in the hands of Kohei Yamadaya. Across the globe, in Canada, Mike Turian strengthened his "Master of Limited" aura with a Grand Prix title in a tournament with most of the big names and, above all, in a five-star Top 8 table.

Before coming back to Europe to finish the season, the Tour again embarked on a long flight. This time to sunny Brisbane, Australia. The locals were not about to let anyone take their home Grand Prix and poured six players into the Top 8, along with New Zealander Roger Miller and Top 8 record holder Alex Shvartsman. Out of that, fray fifteen-year old Richard Johnston emerged victorious (lifting a trophy that threatened to crunch him).

A final note to the Limited season so far, came from the New Orleans Masters. Mike Pustilnik stomped over Chris Benafel, whose ABU's teammates finished in the top spots as well, to take the big check. Curiously, despite all the mid-season hype, none of the players (like Turian before) had blue in their decks. A deliberate plan or a mere reflection of those particular drafting tables?

And so almost two months later the season faces the proverbial final curtain in Biarritz. Almost a year ago at Grand Prix Porto, two French players showed their Limited expertise by setting up the first ever - and the only one so far - Grand Prix final between two brothers. Olivier and Antoine Ruel met in that special match, with Antoine taking the title. A year later they are still riding high, with Antoine scrounging four European Grand Prix Top 8 spots and capping his season with a Worlds' Top 8.

Can the French give us another moment of Magic? Will Kai show up and even up his trophy room with another Grand Prix? Can Alex Shvartsman reach yet another Top 8? Will ABU continue their brilliant performance from New Orleans Masters? Stay tuned during the weekend and check out what the big names have to show in this last Odyssey Limited showdown in this spectacular location.