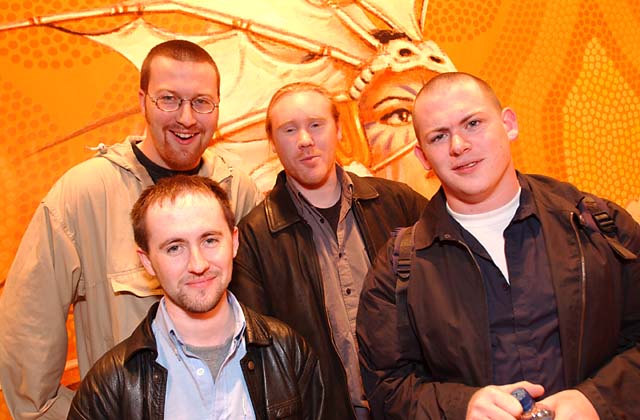 Part of the fun of World Championships is watching the National Team standings. For too long, the United States has had a stranglehold on the Teams Competition, but this year, with powerhouse teams showing up from Germany, The Netherlands, France and Sweden, it's really anyone's game.

As Day 1 drew to a close, only one of the five hot picks was fighting for top spot: Sweden. Round six ended and Sweden was in second by four points. The day belonged to Ireland.

Team Captain and three-time Irish National Champion John Larkin is as surprised as anyone to find his crew in the lead. For him, Standard Constructed was the big hurdle. He was confident in his Psychatog deck, but felt that it would come down to matchups. He faced five mirror matches in the day. Teammate Dave Kearney, also playing 'Tog ran into four. It's a credit to Cormac Smyth that he read the field well enough to run 'Tog's nemesis: Squirrel-Opposition. He faced four 'Tog decks, and closed the day at 4-0-2. Alternate Robert McKeon is 4-2, with red-green beatdown.

Larkin knows that eyes are on him and his teammates and that they'll need to pour it on today to keep their place. He also knows they're up to the task. Part of that confidence in his team comes from their being good friends. Smyth, Kearney and Larkin have played and tested together for years now. The Irish Magic community is somewhat smaller than most, and much more tight-knit. The difference is pronounced at tournaments, where the focus is on having a good time, and not cutthroat competition. Just don't make the mistake of thinking that that makes them somehow less equipped to win.

In fact, the Team Draft portion is the only part of the tournament that has the Irish worried. They've had only a few practice sessions, and in those they were working with a different seating arrangement. Larkin jokes "If we put Cormac in the middle and he drafts blue-white, he'll draw every time." However, with Standard Constructed out of the way and a success, they're confident that their ability as drafters can keep them on top. And as for Block Constructed, they've got a deck that they're really excited about. Of course, that's top secret.