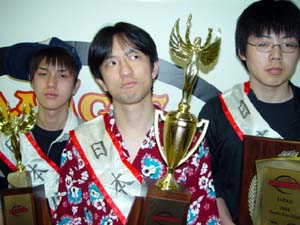 has never failed to send high caliber players to the World Championship. This year, the team's chances look quite good, though it lacks some of the powerhouse veterans expected to be on the team. But with a mix of famous names and dark horses, the Land of the Rising Sun has a strong shot at capturing the World Championship.

2004 Japanese National Champion Tsuyoshi Fujita was the first Japanese pro to make to a Sunday, and went all the way to the finals at Pro Tour Osaka 2002. Until Masahiro Kuroda took the trophy at Pro Tour Osaka, he was the most successful Sunday player in Japanese history. He's won Grand Prix: Bangkok and Kyoto 2000. He's made one trips to the Invitational, where his Dance Dance Revolution skills have been widely touted in print. He resides in Osaka.

He has worked with the highest caliber of Japanese pros before, as . Like many of the top Japanese pros, he frequently taps the talents of Go Anan, who streamlined the green-splashing Goblin deck that got him to today. As the senior player on the team, he will probably take the lead in coordinating the team's efforts.

Kenji Tsumura (finalist), hailing from Hiroshima, follows a line of hot young Japanese sensations. With some success on Japan's Grand Prix circuit, he's qualified for the Pro Tour five times already, and is a mere 17 years old. He made it here by the Grinder tournament. The Tour has been cruel to him, however, with all five efforts failing to produce a Day 2. This is his first big breakout finish. However, he will not be attending Worlds, because of scheduling conflict with his school final exams. This has happened before numerous times in Japanese Worlds teams, so the alternate player, Shuuhei Nakamura, will be attending in his stead.

Shuuhei Nakamura has numerous Grand Prix big money finishes to his name. He was responsible for piloting a hot red/green Invasion Block constructed creation, Rocket Shoes, to a GP finals at Kobe 2001. He's made top eight appearances at Grand Prix Yokohama and Fukuoka in the last year. He finished second in last year's The Finals, a very prestigious annual tournament held each year on December 31st. Expect big things from Nakamura.