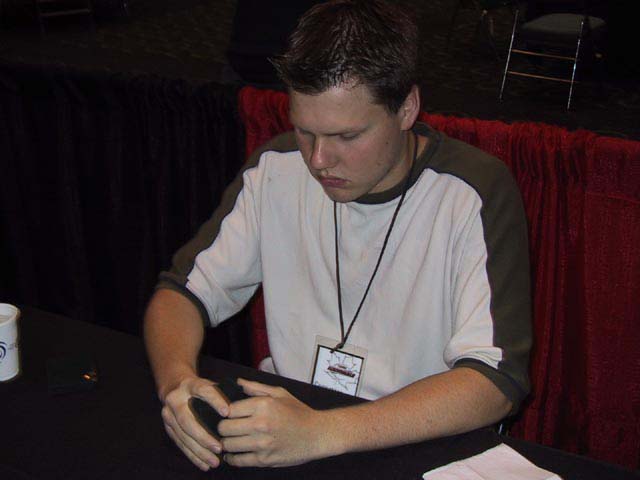 Twenty-one year old Jason Simard came to Canadian Nationals based on his rating, and he's been no stranger to success. With a good finish at Pro-Tour Chicago 1999, and a Top 8 in Canadian Nationals that same year, he took some time off from the game to focus his getting his degree in Education at the University of Winnipeg. "I came back to play in this tournament because a FedEx package sent me the invite."

His Red/Black/Blue deck was designed independently of the Amateur Championship deck, though it was incredibly similar in a number of ways. "I played the same deck at Regionals this year. I thought it would be a great deck to beat the Probe-Go I expected to see and I knew it would have a fair chance against Fires and Rebels. I don't want to play against Skies, though."

In the draft, Simard finished a respectable 4-2, staying with a common strategy - declaring his colors, and sticking to them. "I tried to keep in my colors, but sometimes my neighbors would make it rough. I think that there were a lot of drafts where the players were less familiar with what to do."

His first round matchup would be incredibly favorable. Facing Louis Boileau, Simard's main deck Teferi's Response would come in quite handy against Boileau's Opposition. He has some high hopes to make it onto the National team. Though he's had some success in the past, this year was a bit different.

"I did well before at Canadian Nationals, but this year, it was just a little overwhelming. I kept playing in Feature Matches, and I wasn't used to that."