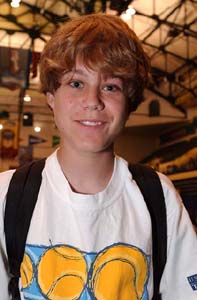 Junior Super Series Player Josh Tabak came from Madison, WI to be one of the 329 competitors of the $100,000 prize purse in the JSS Championships. First prize in this event is $20,000 in college scholarships to the college of the player's choice.

Josh is a sporty 14 year old 8th grader, whose last day of middle school is this coming Tuesday. His school friends don't play magic, so he goes to his local game store, Misty Mountain, to get his practice in. There are three weekly magic tournaments run there, giving him a lot of magic in his weekly diet, so he can grow to be a strong pro tour player one day. Players that he normally plays with are names like Bob Maher, Jr, Adrian Sullivan, Matt Severa, and Ben Kellerstrass (who is playing in Nationals this weekend). I asked who he has learned the most from, and he replied that there wasn't a specific person that he's thought of as a teacher, he just likes gaining a lot of experience.

Josh moved to Madison from Kansas City approximately four years ago. In Kansas City he played a lot of Star Wars, and in moving to Madison the people at the local stores didn't play a whole lot of Star Wars. They played Magic the Gathering. Thus Josh adapted to his environment and started enjoying the "obviously better game" of MTG. He likes the seemingly random aspect of who he will get paired against and what deck they could possibly be playing at different tournaments in different areas.

After qualifying for the JSS in Madison, Josh spent a while studying the environment... However he wasn't sure exactly what deck he would be playing for the tournament until a few hours beforehand. "I had an idea of what to play, but the environment kept changing. Yesterday's Nationals format is a lot different than today's JSS environment," Josh explains. "I got some sideboard advice from Adrian, and pieced things together from online and some other friends, but wasn't happy with a decklist until this morning."

Squirrel Opposition with red for Flame Tongue Kavu and Fire/Ice was his final decision for a deck. "It beats the mirror match Opposition decks and Psychatog decks, but it has a little trouble with the Blue Green threshold deck that I saw last night."

Josh is here at Disney World with his father, who is currently playing tennis while Josh competes. Josh hopes to make the high school tennis team when he gets there. The two of them don't have time for any of the theme parks this weekend, because Josh can't miss the last two days of school this coming Monday and Tuesday... But he's happy to be competing in the highest level tournament that the JSS has to offer.