The Junior Super Series is designed to give tomorrow's stars an even playing field to gain experience and scholarship money. Only players who are fifteen years old or younger and have no Pro Tour points can play, which provides a good step below the Pro Tour level for younger competitors. The system works, too. Players like Jon Finkel, Zvi Mowshowitz, Dave Williams, Bob Maher, Steve O'Mahoney-Schwartz, Jeff Cunningham and Joseph Crosby all got their start in Junior tournaments before becoming Pro Tour stars. 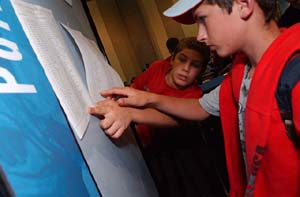 Now, the problem is, what happens when potential and the here-and-now clash? A handful of players came to San Diego this week qualified for both the JSS and Nationals. With a first place prize of $20,000 in scholarships to the winner of the JSS, and a $25,000 prize to the National Champion, the decision seems to be obvious. After all, the JSS is obviously an easier tournament, and the payout isn't drastically lower. This issue seems simple enough, but throw a winning record into the mix, and things become a lot more complicated. Michael McGee was qualified for both events, and came into the last round of today's half of Nationals at 5-0. Despite this, he was planning to drop if he ended the day at 5-1. Why? McGee simply responds, "I was expected to win JSS." Even with a solid 5-1 record, McGee would have to weigh his potential for profit in Nationals against his potential for doing well tomorrow, so by his calculations, 5-1 was the cutoff point. Despite this, he had Echo Tracer to stop Phil Freneau's Mythic Proportions in Game 3 of their Feature Match, and ended the day at 6-0.

As soon as McGee won his match, the spectators applauded, and then he was mobbed by friends. Pro Tour Player Ken Krouner actually suggested to McGee that he should still drop out since he could probably make more money in the JSS, but he'd have none of it. He's 6-0, and he's going to play it out for the greater glory tomorrow. Of course, if he has a bad day tomorrow, Mike will simply play in Sunday's JSS Challenge, which is a qualifier for next season.

Many other JSS players with lesser records dropped out. Arthur Minetz went 4-2 and decided to play in the JSS tomorrow, but says he would have stayed in Nationals if he won his last match to finish up the day 5-1. "I figured I might be able to go 4-1-1 (to make Top 8) and I'd like to test my skills in Nationals." As is, he lost to Matt Rubin in Round 6, so he'll be playing with the Juniors tomorrow. "I don't think I can Top 8 now, and that's the only reason I would have decided to stay in. I think I have a good chance to make Top 8 of the JSS."