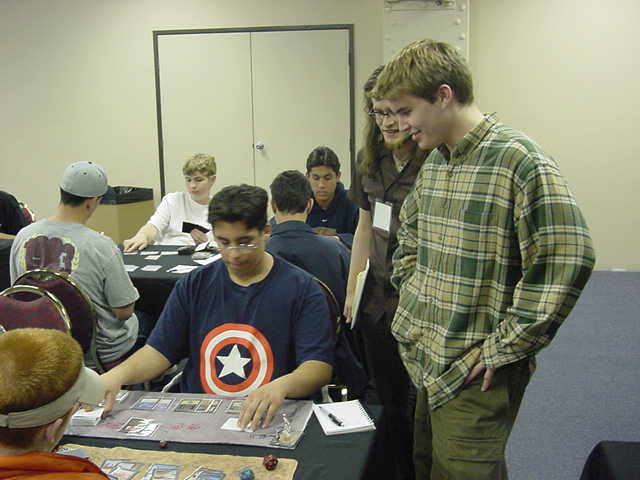 Naveen starts the game with a mulligan, but lays the first spell, Plague Spitter. Nathan drops an Idol for the defense, and Naveen Snuffs it out to get through, dropping an Abyssal Specter.

Nathan burned the Specter and dropped a Saproling Burst to change the flow of the game. Suddenly, Naveen was on the defensive, dropping an Idol to hang back and block. Naveen Snuffed Out a Saproling and blocked the other two with his Spitter and Chilling Apparition, but he lacked enough mana to both block and regenerate from the death of the Plague Spitter.

Low on life from casting Snuff Outs, and facing a River Boa, an Idol and a Saproling Burst token, Naveen conceded after failing to draw an answer.

Nathan dropped out 2 River Boas in favor of Kavu Chameleon, while Naveen dropped 4 Idols, a Decree, and a Vendetta for 4 Perish and 2 Meekstone.

Nathan's turn 1 Bird of Paradise was matched by Naveen's Charcoal Diamond. On the next turn, Nathan dropped that classic turn 2 Fires play, Fires of Yavimaya. His hand is full of five casting cost goodies like Kavu Chameleon, Ancient Hydra and Saproling Burst, but he has nothing else to drop to go on the offense.

Naveen dropped a Chilling Apparition, and sent it in on the next turn, then dropped a Rishadan Port to keep Nathan off of the critical 5 mana for another turn. The next few turns, Naveen continued to use the Rishadan Port to keep Nathan from 5 mana, and the Chilling Apparition made its slow assault of Nathan's hand. Soon, a second Apparition joined the fray, and then an Abyssal Specter.

Finally, Nathan drew the necessary land, and his last card in hand, Saproling Burst, came into play, bringing Naveen down to 8 life in short order. Naveen settled back on the defense, but Nathan used a Rath's Edge to make an Apparition regenerate, and force Naveen to chump-block with his Specter.

"Perish!" snarled Naveen, as he hit the top of his deck.

It was not to be. On the next turn, Nathan's attack finished the game.

That's what Nathan had to say about winning the Junior Super Series Challenge and the $1000 Scholarship. After the finals match, Nathan told me that besides being a little lucky, the biggest reason that he felt he did well was the Rath's Edge he added to his deck.

"You can sometimes get someone down to 2 or 3 life, and then if the other player has something to bring the game around, you might not be able to finish them off. The Edge does it."

"I put a lot of work into this. Before I wasn't so prepared against Skies, and so I would lose because I didn't know how to play the match, or how to Sideboard for it. Now, I feel like I can beat it, just because I've got the practice."

However he does in Florida at the Junior Super Series Championships, Nathan plans on being very prepared for it when he gets there.

"I had a great deck. GrantFly made the deck for I-Magic on NEWNET, and he's been doing great with it. I went with it because it looked like it had a lot of good matchups. I might add in Unmasks if I play it again."

The deck certainly performed well in the Swiss. Naveen only lost one match, to Ponza player Jacob Kory, though Naveen feels the loss was somewhat unlucky. The rest of the diverse field couldn't do as well as Jacob, though.

"Whether it was the Abyssal Specter, the Meekstone, the Dustbowl, or the Plague Spitters, they just couldn't seem to handle me."

"I might not have won against some of the burn and when I blocked. That one extra toughness is huge."