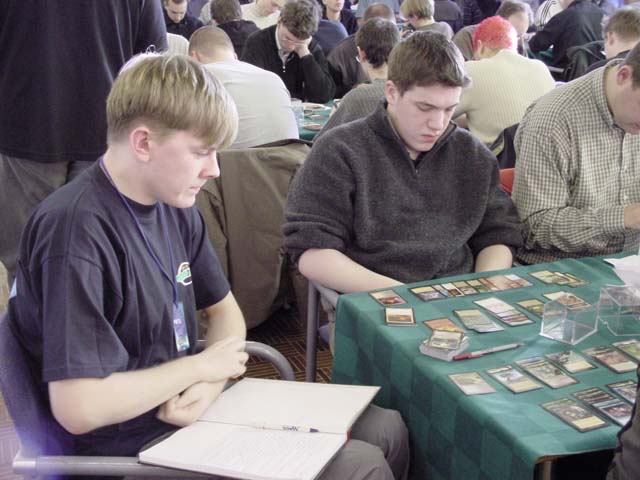 As most of you will be aware, day one of Grand Prix Amsterdam is Sealed Deck format. Many players dislike this format for the luck element inherent in it, but despite being one of the world's top Magic players, Kai Budde still enjoys playing this format.

Kai has had a good start to his Pro Tour Season, leading the way in the Player of the Year race after winning the most recent Pro Tour, in Chicago. He is very well known as a Constructed player, along with his team-mates such as Warren Marsh and Ben Ronaldson. As a whole this team tends to concentrate on deck-building rather than Limited play, but Kai told me that he had done around five hundred net-drafts. On the other hand, he hadn't done very much testing for Sealed, so he'd have to get through eight rounds of play before he could see how his net-drafting skills translated to the real thing.

Players were allowed forty-five minutes for deck construction, which most people find more than enough to build, as the amount of playable cards you get in each color limits you considerably.

These were the cards that Kai had to construct a deck from :

He started as most do, by sorting his playable cards by color. Already he was unhappy, without even trying to build any decks, as none of his cards are 'broken'. In Sealed it is very important to have a spell or two which is usually a game winner when you play it - I am thinking of things like the Dragons, Pyre Zombie, and Spinal Embrace. Of course most of these are rares, so this is one area where a lot of luck comes into the format.

He was also annoyed not to have a Probe or Exclude, as his favorite colors from this format are black and blue, and to a lesser extent, red. Of course, it is possible to build a great deck from green and white as well, but this happens more rarely, as these colors have less good non-creature spells, especially creature removal.

One problem he faced is that he only has seven, or eight at most, good cards in each color. This forces him to go three colors, which is usual in Sealed, but none of his colors can really be a splash.

It seemed like despite not having either of the two cards mentioned above, blue was still his best color, with creatures such as Blind Seer, Metathran Aerostat, and Faerie Squadron.

Most of his deck-building time was spent considering two decks. One is a five color green type of deck, although it changes between four and five colours as he tries to decide whether to play his Exotic Curse and Recoil in it. One of his potential problems was that he did not have a Harrow. This type of deck, for obvious reasons, is more at risk from color screw than most. He has a Fertile Ground, a Quirion Trailblazer, and a Quirion Sentinel, but this might not be enough to avoid bad land draws.

The other deck that he worked on is wa blue/black/red deck. Along with many top players, he would play these colors given the chance. At the recent Grand Prix Phoenix, most of the top sixteen were playing blue and black in their decks, and green/white decks struggled.

Unfortunately, Kai didn't have enough good cards to build this deck well; he only had twenty cards that he would be happy to include in his deck, and would then be forced to include sub-par cards live Kavu Scout, Metathran Zombie, Phyrexian Reaper, and Duskwalker.

Kai is a very thoughtful deckbuilder, spending a long time looking at the different possibilities without moving the cards about. Eventually he decided to build the multi-colored green deck, omitting the black in favor of a better mana base, although this meant leaving out Recoil. Here is the deck he eventually built.

Although Kai has three byes, this deck might still not be enough for him to make day two, because he will start by playing people with strong 3-0 decks. He has to wait and see if all that time spent net drafting will be useful in this tournament.