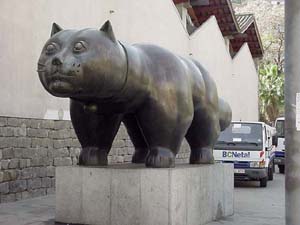 As we look around the Spanish site we see some very familiar faces like the Ruel brothers, Patrick Mello, Edward Fear, the Dutch Boeken, Wiegersma and Snepvangers, Frederico Bastos, Farid Meraghni and many others to whom we have gotten used to.

But where is Kai Budde?

What reasons are there not to come to sunny Spain and play in another Grand Prix? Especially when you have good chances of winning like Kai has. Maybe it gets boring at the top and you don't like winning Grand Prix tournaments anymore after a while. But that is not the case here.

As far as we know Kai is returning today from Pro Tour Osaka, where his team won the Masters. He could have made it to the beautiful place that is Barcelona. So what is he doing?

He is at home, probably reading the Sideboard, as you and taking care of his mother's cat back in Germany since she is away for the weekend and he promised to do so.

It seems Kai will let somebody else win for a change.