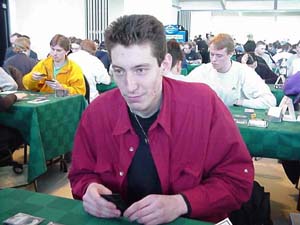 Sinan BolcaSinan Bolca, of Sint-Niklaas in Belgium, was recommended to me for my first deck interview because of his excellent performance as the reigning Belgian National Champ. He played to that title with a deck of his own creation, which he built specially with cards he admits "nobody ever plays" in order to beat the dominant deck of that time -- Fires. Sinan has also attended the World Championships and the European Championships, but described his achievements in those tournaments as "average".

We chatted a bit about the tournament scene in Belgium, which is up-and-coming again after a brief decline. Belgium has a lot of inhabitants in a relatively small area, so tournaments are easily accessible but not overwhelmingly large. Sinan felt very positively about the Belgian players, who he thinks are becoming better and better all the time.

Today, Sinan is playing a black/blue deck with a splash of red. His red splash, most unfortunately, involves multiple cards with a double red casting cost.

"My main problem was creatures," he said about his deck. While he had a Beast Attack and a Rabid Elephant in green, both cards were too color intensive or mana intensive to splash. His Torment offered him no good green cards, so that took green out of the running immediately as a playable color. As for his white...

"I got every 1/1 in every possible set," he grinned while he fanned out his sideboard to show me. I'd have to concur that white was not really very playable for him. He has a Major Teroh in the sideboard, which Sinan admitted was "really good in the environment", but the double white activation cost was its downfall.

That left black and blue and red.

Sinan had relatively decent black, with a few removal spells and a couple of good creatures. Surprisingly, he chose not to play Crippling Fatigue in the main deck, citing the double black cost of the spell as the reason for his decision. Why he then chose to play Morbid Hunger despite the same problem is unclear.

His blue was great threshold blue, with a Looter and a few fast card-drawing spells to get him those critical seven cards in his graveyard. Many of his spells possess a madness cost, so that opens up a new realm of tricks with his Looter, Wererat, Aquamoeba, and Sickening Dreams.

Sinan claims that he was forced into red as a third color because his two best creatures are red and his removal spells are red. Red combines well with his other two colors because of the threshold and madness, he said, but he regrets that his splash color has so many spells that cost double red.

Unfortunately, as he said before, his deck lacks creatures. Most of his creatures are small and unable to finish the game for him. This deficit forced Sinan to play some creatures that many players consider to be less than optimal: Longhorn Firebeast and Boneshard Slasher.

Longhorn Firebeast, Sinan said, "is average, but I needed more than ten creatures." He suggested that one of the ways that his deck could win was by direct damage (since he has Fiery Temper, Sickening Dreams, Pardic Arsonist, Liquid Fire, and Morbid Hunger -- that's at least fifteen points of damage right there). In that regard, the Firebeast fits right in.

His feeling about the Boneshard Slasher was that he had a choice between something that could at least have some form of evasion, or else some other small creature from his sideboard. Despite the Slasher's severe drawback of dying if it's targeted, it does possess the advantage of becoming a 3/3 flyer when Sinan has threshold. Threshold is, at the very least, not among Sinan's deck problems.

"Luckily I can go for threshold quite fast. If I can start with some strong blue openings, go quite fast to threshold and do some tricks with madness, I can eventually take control." That's the plan at least. Once control is established, he has cards like Chamber of Manipulation to keep control. His main problem, he said, will be how to kill his opponent.

"I definitely lose to red/green or red/black aggressive decks," Sinan continued. His deck lacks the fast creature drops and fatness to slow such a strategy down. His Wererat and Mindslicer will help a bit, but it's pretty touch and go.

Sinan chose not to play Reckless Charge because his red is only a splash and "I have no creatures to target with it." He opted against the Cabal Torturer for the same reason that he chose not to play the Crippling Fatigue, and the Whispering Shade is staying in the sideboard because he hasn't got enough black mana to make it worthwhile. Thermal Blast, he said, is too expensive and can only target creatures. "The rest is basically junk."

When I asked him to predict his record with his deck today, Sinan was vague. He's not entirely sure he will make it to the second day. Surely it will be a tough day for him. He predicts that he will be "going almost every time for three games" in every match, since it will be "hard to get straight wins" with his deck.

As we concluded our chat, Sinan asked to wish the Brainless Beebles club and his girlfriend Lieselotte Heirbaut good luck for today. Lieselotte is qualified for Belgian Nationals, he explained, and she is playing in the Grand Prix.

"And of course good luck to all Belgians," he added.