Is the King Dead? 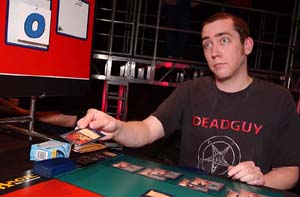 It's always bothered me that Sol Malka gave himself the nickname "People's Champion" when it so obviously belongs to someone else. David Price has been so popular with the people who pay attention to Magic's Pro Tour that he's been voted into multiple Invitationals. Rarely has Price been mistaken for one of the best players in the game, but his self-effacing attitude, his writing skills, and his tremendous impact on the game have made him the hero of Magic players everywhere.

The King of Qualifiers has never missed a Pro Tour ... ever. Only two other players can make that claim: Jon Finkel, who gets an asterisk in the record book because he started out on the Junior Pro Tour, and Darwin Kastle. Finkel and Kastle cruised into most of those Pro Tours on Pro Points, but Price's road has been much tougher. He's only finished in the Top 32 three times in his 33 Pro Tours so he's been forced back to the qualifiers many times. His back has been against the wall on more than one occasion, but when that last weekend of qualifiers rolled around, Price always put up a "W" and got back onto the Tour.

Price needs to finish in the Top 32 this weekend or he falls off the "gravy train" yet again. Is the King dead? Well, the last time he did that well at a Pro Tour was Worlds 1998. I just watched Price take down the "Last Emperor" – Jin Okamoto – with his mono-black deck so anything is still possible. In addition, there are a couple weekends of qualifiers left, so the rumors of his death might be exaggerated.

If Price's amazing run does end here, he'll leave the game with some great memories. Price's "Town of Red House" changed the game in a very fundamental way. Back when everyone else was obsessed with card advantage and Counter-Post, Price put together a mono-red deck with Dwarven Soldiers, Orcish Captain, and Lava Hounds (not to mention Fireblast and Ball Lightning) and ran the table at US Nationals, slaughtering every unsuspecting Standard deck he ran into just by dealing 20 faster than they could. When Tempest came out a few months later, Price's philosophy took over the game and "Red Winter" ensued. Price then won the Tempest-block Constructed PT Los Angeles with Deadguy Red and put $25,000 (of his career total $34,000 of prize money) into his bank account. The game has never been the same.

PT LA was also when Price was given his second crown – the King of Beatdown. Not many people get to be the king of two different things, but Price earned both his titles and didn't need to give either one of them to himself. I don't think I'll be the only one watching this weekend, hoping Price won't be forced to put back on his other one.