ars Dam has had one hell of a weekend. With a two-match lead over his closest competitors, Dam spent half of yesterday knowing that he would be sitting in the feature match area on Sunday, and it really helped him focus.

"It really took a lot of pressure off," he admitted. "Still, I had to play the matches. I still wanted to win. After all, I didn't get as much of a chance to test as I would have liked, so the Standard rounds of Saturday were an opportunity for me to practice!"

And he would need the practice. His opponent in this second Semifinal match is the returning Champion, Dmitriy Butakov. Butakov has experience playing under these lights for this incredible set of prizes, and he isn't about to let Dam's overwhelming performance deter him.

"This is just another Magic game," Butakov explained. "You can't succumb to the pressure or the stakes. Just keep calm and play Magic."

Lars Dam is a Danish Magic player who has had a long tenure in the Magic community. Playing in his first Pro Tour early into the millennium, Dam has been playing the game for about fifteen years now, and has the largest amount of Pro Tour experience of any player in the field. After moving to Thailand, his ability to play live has shrunk to match the now-smaller size of his local community, and Magic Online has provided him a way to keep playing and stay on top of his game. He was effectively the front-to-back leader for this tournament, clinching his Top 4 seat early into play on Day 2. 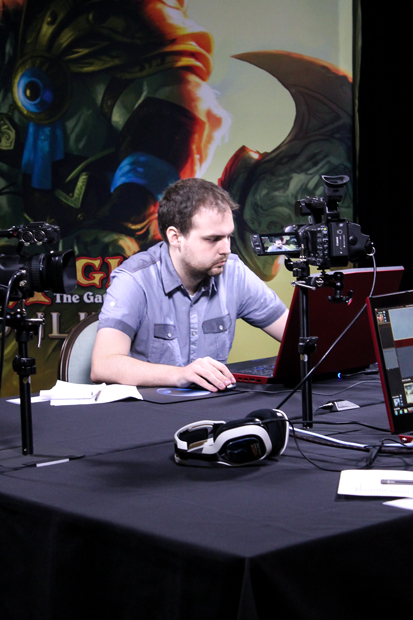 Dmitriy Butakov is the returning Champion from the 2012 Magic Online Championship, and has incredibly powered his way through to his second consecutive Top 4. Cool and calculating, Butakov has endured the spotlight and the pressure that comes along with playing in this condensed field, as well as the incredibly difficult field of the World Championship. Clearly drawing from these experiences, Butakov managed to make it into the Top 4 on his tiebreakers, having played through one of the most difficult paths to the Top 4 in the tournament.

Dam has chosen to run the recently popular Br Devotion deck as his Standard deck for this tournament. Using a typical Black Devotion shell, Dam's version touches red to add in Sire of Insanity and Slaughter Games, giving him a much better game against the decks with Sphinx's Revelation. This includes the deck played by his Semifinal opponent, Dmitriy Butakov, who opted to run with the omnipresent Esper Control deck. His deck is virtually the same deck run by Hall of Famer Paulo Vitor Damo da Rosa in his run to the Top 8 of Grand Prix Buenos Aires a few weeks ago.

The first game of this Semifinal match was all about proper timing. The indefatigable Dam kept going as strong as he had in the closing rounds of Day 1, opening with a second-turn Pack Rat. The ever-patient Butakov waited until Dam had made a second Rat token before hitting them both with a Detention Sphere, netting himself a nice two-for-one. This severely restricted Dam's development, putting the game into Butakov's hands. Jace, Architect of Thought, drew him into his other superfriend, Elspeth, Sun's Champion. 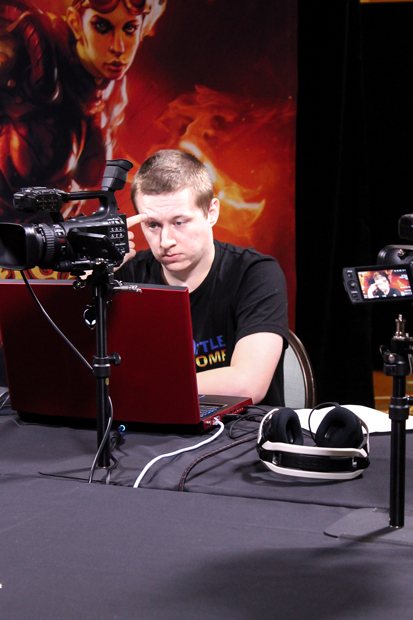 This Elspeth was the first of many cards from the top of Butakov's deck that were able to keep the game in his hands. After using her to both make defensive tokens and kill the Demon, Butakov's hand was wiped out by a Sire of Insanity. His deck obliged him first with a Detention Sphere to handle the Sire then a Negate to defend against a Hero's Downfall. That bought him all the time he needed to make a lethal army of tokens to take the first game.

The second started much as the first had, with Dam making a second-turn Pack Rat, using it to make a token, and then having them both removed with a Detention Sphere. This time, however, Butakov's deck was a little less forgiving, and Dam's was a little more punishing. Thanks to an early Nightveil Specter, Erebos, God of the Dead, was able to hit the ground running, scaring Butakov into clearing the board with a Supreme Verdict. An Underworld Connections and Lifebane Zombie did the job of filling Erebos, God of the Dead's devotion, and the 5/7 God smashed over for almost all of Butakov's remaining life total over the next two turns, dropping him to 1. He held a Sphinx's Revelation in his hand, and he was planning on casting it, but a timely Sire of Insanity negated the worth of that play, sealing Butakov's fate in the second game of this tense Semifinal match.

The third and final game was another incredibly close affair. As had become standard order for this match, Dam opened with a Pack Rat and a token, this time losing them both to Supreme Verdict. From here, the game of disruption began. Thoughtseizes flew back and forth, shredding hands. On one side, Dam was able to refill his hand thanks to Underworld Connections, now safe thanks to the Thoughtseize. On the other, Butakov found himself short of lands, but with an incredible grip of cards, even in the face of multiple discard spells. At one point, Butakov held two Sphinx's Revelations, Syncopate, Ultimate Price, and Elspeth, Sun's Champion. Unfortunately, at four lands, he was finding it difficult to cast them. This was especially true in light of how the last game ended.

With Sire of Insanity a possibility from Dam's deck, Butakov found it tough to spend his mana casting spells. Butakov began to blow through his Revelations in an attempt to find lands. He did manage to find lands five and six, giving himself the window he needed to cast Elspeth, Sun's Champion. Unfortunately, he had taken quite a beating from Dam's Mutavault, falling to a low 8 life. After one more attack, the turn after Elspeth hit the table, Nightveil Specter combined with Underworld Connections and Erebos, God of the Dead, to allow Gray Merchant of Asphodel to buy a lethal drain for eight life.