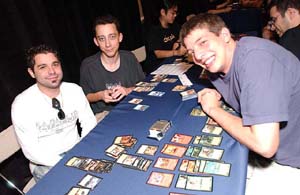 Winning a Last-Chance Qualifier is always a mixed blessing. Sure, you get your shot at Pro Tour glory, but you have to do so on little-to-no sleep, hardly a recipe for success. At the Team Pro Tour, it's even harder, with teams of pros running interference for their friends, or teams like "The Mixed Bag" (Zajdner, Wagener, and Myrvig), getting some much-needed Team Sealed practice. This year, 37 teams were in the running.

Canadian National Champion Josh Rider had originally planned to spend the months following Worlds backpacking around Europe. Unfortunately, a Top 32 finish and the qualification for New Orleans that went with it threw a wrench in his plans, forcing him to step up his return date. After that, he Top 8'd Grand Prix - London.

"That was my mistake, thinking 'Hey, maybe I'm good at this game!'" -- Josh Rider

He wound up in Boston with no team, hoping to pick up some stragglers. Paul Sottosanti was on-hand, but with an hour until the qualifier, they still hadn't found a third. Their white knight was Filiberto Piernoli, a player from Italy whose team bailed on him. They rounded up all their friends to block for them, and threw the dice. 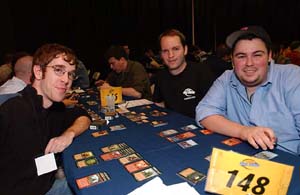 They took an early loss, but managed to hang on until the Top 4. There, they beat Stone Cold Supercuts, composed of Baby-Faced Assassin Zach Parker and pals.

The other team to qualify, YMMV, came to the Pro Tour with the intention of qualifying. Chris Manning needed a team, and all the best players in his area already had squads. In order to brainstorm possible teammates, he looked at the Limited rankings for his state. Topping the list were two names that he couldn't believe had slipped his mind: Lucas Glavin and Derek Bruneau.

They took the Swiss like they knew the slot was already theirs. They fought for the berth with Da Champ and Two Chumps, Eli Kassis and Rory Walker (who were already qualified with Eric Taylor) and "Crazy" Carl Winter, the Type 1 Champion, but the slot belonged to YMMV.

Now those two teams are trying to stave off fatigue for six rounds and make something of their hard-earned prize.