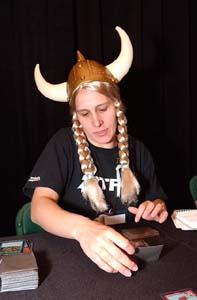 Laura Mills is a 29-year old engineer from Denver, Colorado whose passion for Magic has helped propel her towards elite status within the gaming community, helping her become the only woman playing in this year's US Nationals. We sat down with her to get her thoughts on gaming, women, US Nats and how they all relate to one another.

SB: You've been a casual player for as long as the likes of even Randy Buehler himself can remember. Tell us about your beginnings in the game.
LM: I actually saw Magic when it first came out in Alpha, read the back of a starter, thought it was cool as hell then looked at the price: $9. Nine bucks?? I put it back down, didn't hear about the game for another year, but when a friend came back from a summer in Wisconsin, he introduced me to the game and I became hooked, spending the summer in lines at comic book stores trying to get the newest boosters I could despite the store's one-per rules. From there, I just built up a good black-white Serra-Sengir deck as well as I could (...at this point she sighed, realizing how long ago that was) while I was in Minnesota. I then got accepted to Stanford, and was really excited about the prospect of playing with Zak Dolan, but I was so repulsed by my first encounter with the Stanford play group that I never went back.

I ended up finding someone in one of my classes who played, and he'd heard about some tournaments an hour and a half away, and started driving an hour and a half each way just to play Magic, and proceeded to get my butt kicked by eight year olds with net decks, and that introduced me to the entire internet aspect of the game. After about six months of that, I decided I didn't like constructed very much, but the Alliances pre-release introduced me to sealed, and while I went 1-4, I was hooked. From there, I moved to Denver, started my first job out of college, found a Denver store called The Light Side and they had this phenomenon called Arena, I signed up for that and the rest is history

SB: Now, you started taking the game a little more seriously this year. What happened to cause the change in attitude?
LM: (laughs) I have one person to blame, and his name is Sean Smith. Last year, there was a sealed PTQ, and I had a decent deck that I though might get me into top 8, but I played Sean in the fourth round and the judge made a ruling that went in his favor which we later realized shouldn't have. That started a large online discussion, and things got so confusing that I was forced to decide that no one would ever rules cheese me again. I decided from that point to become a judge, studied the rules, took the test at GP Denver, became a level one judge and then decided that I should give Regionals a shot and maybe shut up the 'playahs' who keep telling us Arena types we don't know how to play. I made top 8 going 6-0-2, and now I'm here!

SB: You face the daunting task of being the lone female representativei n this year's Nationals. Does that add any pressure? How do you like the attention it's brought you?
LM: Looking through the invite list, noticing I was the only woman in the tournament really helped me to decide to make the trip. I think the hat may be getting me more attention than being a woman. Its been fun getting all the attention, and I really came here for fun, so I have no complaints.

SB: Male players, for good or bad, have been forced to accept that not many women find this game too interesting. Why do you think that is?
LM: It falls under the same line as Engineering: It may just look too tough. Guys get all competitive and girls just don't feel they need to be a part of that. If there wasn't so much competition, I think women would be more interested. I run Arena and half my players are women, and they have a lot of fun.

SB: What was their reaction when they found out you'd qualified for Nats?
LM: Well, I have a one-person fan club, and she was really excited for me. Other than that, I'm just one of the guys, and all of my guy friends were happy for me as a player, regardless of my being a woman.

SB: OK, so now you've made it this far, where does Magic take you from here?
LM: I was going to use this to decide whether I should get more competitive or go back to casual, and today I've really had a blast. I've been able to see the difference between myself and the really good players: What they do when I'd do it wrong, and I found they forced me to a higher level of play, and I've really liked going to that level. Unless tomorrow goes horribly wrong, I think I'm going to keep exposing myself to a higher level of tournament Magic.

SB: All the best in your prospective career
LM: Well thank you