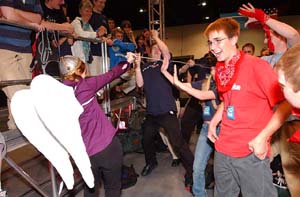 With the fierce competition of Nationals as the backdrop, Richard Garfield introduced his own brand of Magic to the players in San Diego with his Game of the Year -- Live-Action Magic. Live-Action Magic is an actual game of Magic, with the added twist that people are used to represent the cards in the game. Two commentators (Mark Rosewater and Randy Buehler) hold the cards for the players while members of the audience are called to the playing field as the game is played. Props abound, with people adorned with clubs, wings and helmets to represent creatures. Nets, poppers and silly string represent spells such as Shock and Unsummon.

As the clock neared 8:30 pm on Saturday, people were starting to gather around the feature match arena. The arena had been transformed into one giant playmat -- green boxes for graveyard, library and playing field, and one giant red stripe down the middle for the "Red Zone", where creatures advance to attack. Red ticket stubs were clutched in the hands of people eagerly awaiting the drawing to choose Richard's challenger. Richard decided to entertain the audience for a little while as the props were getting set up, so he grabbed three clubs from the table and started to juggle. A few flips of the wrist and they tumbled to the ground, but there were enough exchanges to get applause from the audience.

It was time to start the action. Richard pulled the name Ollie, but Ollie ducked in and declined since he was still in the team sealed event. Ollie got a mild boo from the spectators -- who gives up Live-Action Magic over a PTQ? "Ah, he's just afraid to face Richard," quipped Randy. Another person was drawn: Michael Imbrogno. Michael had come all the way from Charlotte, North Carolina to cheer on some friends in the JSS. And now, all his friends were cheering for him.

Since this is all about life-size magic, judge Sheldon Menery handed a foot-tall 20-sided die to Richard to roll. The die popped up an 8 for Richard and bounced to 14 for Michael. Michael grabbed the Red/Blue deck and Richard took Green/White.

Before the game began, the judge announced the rules that were clearly meant to be broken: "Nothing sketchy, nothing underhanded, no sleight-of-hand, no bribing." 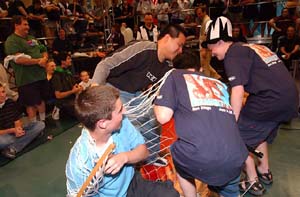 Richard played a Forest, and Live-Action Magic had officially begun. He grabbed a green-shirted kid out of the audience. A lovely woman donned a crow's mask and starts flapping peacock feathers to represent Richard's newly-summoned Birds of Paradise. Michael's turn started with a lazy Mountain that immediately made himself comfortable by sitting on the ground. "You have to stand up until you're tapped," reminded Mark Rosewater. Michael's Mountain was feeling the effects of a long day of Magic and begged its controller to tap him. Michael obliged with a Firebolt: a grip of sponge balls was chucked at the poor Birds of Paradise.

Richard grabbed a white-shirted Plains from the audience on his turn and passed. Michael followed suit with a red shirt for a second Mountain. He then started strutting around the stage, hunting around for a suitable Grim Lavamancer. An overly cheery kid got armed with a Jester's cap and silly string. "Grim! You need to be Grim!" cried commentator Randy Buehler. Richard met the first creature with his own Noble Panther.

Mike's turn and he decided to lay his first Island, and Rosewater reminded him to follow tradition with a female. "After all," explained Rosewater, "No man is an Island." No event would be complete without an terrible pun. Mike revealed a Volcanic Hammer, and the audience erupted as the Noble Panther was clubbed with a plastic nightstick. Richard lay his fourth land and passed, depriving the crowd of any action.

Michael knows how to please the audience, and Richard got a popper aimed at his chest from a Shock. The streamers fell short of the target, but the judge ruled that damage had been done. Adding insult to injury, Garfield took a face-full of silly string from the Grim Lavamancer who had been sent into the Red Zone for an attack. First blood was drawn -- Richard 17, Michael 20.

A Spined Wurm finally came out to play on Richard's side, replete with a nice black cone on his head. Dolled up in black shirt and pants, he looked more like a Nightmare Unicorn than a Spined Wurm. Fashion attire mattered little as Michael's henchgirl attempted to lasso it back to Richard's hand with an Unsummon. She only managed to throw the rope at his stomach, but the Wurm was gone. The much-too-happy Lavamancer gave Richard another blast of Silly String.

Spined Wurm was back, but Michael has the answer with Lavamancer followed up by Shock. The notorious Ed Fear made an appearance as Shock, and the Spined Wurm started cowering. "Everyone 'Fears' the Shock," noted Buehler, trying to infringe on Rosewater's punsterism. 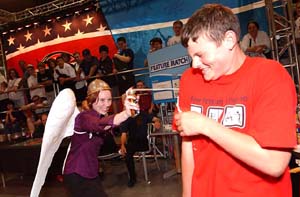 Although Richard was behind on board position, he knew how to win over the audience. He grabbed an adorable little kid to put on a stethoscope. Michael eyed the Lavamancer target hungrily. Would he become the enemy? We found out after Richard cast a Pincer Spider and passed the turn. The Lavamancer gave the Samite Healer a good dose of silly string. The spectators expressed disappointment, Michael already knew how to win them back. He cast everyone's favorite critter -- Tim the Prodigal Sorcerer. The lucky person was equipped with Harry Potter glasses and, yes, a water-filled squirt gun.

Michael's creatures suddenly looked like insects compared to the hulking six-foot giant Richard grabbed to represent his Gorilla Titan. Too bad Richard didn't think to bribe his graveyard to leave, since Michael quickly came after it with a Flametongue Kavu...but the Kavu was having problems with his silly string can, and can't get damage on the Titan! The Flametongue wasn't about to let him get away, though: he tried again, and again, and again, and finally pushed the Titan to the graveyard.

Richard kept things interesting with a Living Wish. "Silvos! Exalted Angel!", screamed the spectators. They know what's good, but Richard, the master of his own game, did everyone one better. He named Akroma. The lovely Mary Van Tyne made a cameo as the Vengeful Angel of the evening. Everyone reminded Michael to use Tim, and Richard stands up and took the squirt of water like a man. Richard 14, Michael 20.

Faced with a next-turn Akroma, Michael grabbed another underling to clobber Richard's Forest. He then cast Unsummon. "Me! Me! Me!" screamed his Flametongue Kavu, but the Pincer Spider on Richard's side ran away instead. All of Michael's creatures swarmed Richard and bombarded him with silly string and water -- Richard was now down to 8.

The Pincer Spider comes back to the board, this time with kicker. Actually, it was more of a tap from Richard, who has an apparent dislike towards spiders. A punch on the arm from his Brushland put him at 7. Michael was ready for the defense. "It's Hammer Time!" The spider was clubbed for three and Tim soaked him for the final point of damage. The Flametongue ran after Richard, but he dodged the blast. "The Kavu missed!", states Richard. Judge Menery halted the game for an instant replay, in slow motion. The Kavu obeyed and crawled towards Richard, dragging up his arm, and aiming. He missed. "No damage," rules Menery.

Richard played another Forest for the final land to cast Akroma, to everyone's amazement, but he passed the turn. What could he have up his sleeve? As Michael sent everyone to finish Richard, we saw what it is. A hammock got wrapped around Tim, Flametongue and the Happy Lavamancer. They'd been Tangled. 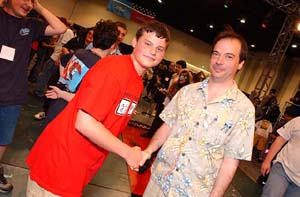 Akroma Van Tyne finally came out, did a polite curtsy, and charged after Michael to put him at 14. Michael tried desperately to finish Richard off with another volley sponge balls, but his aim was poor. "No damage!" ruled the judge. Michael wasn't too happy with the call, and aimed Tim at the judge. Unfortunately, the judge has 400 hit points (which don't heal). He was still at 387 and the ruling stood.

Akroma chased Michael again. Staff member Alan Comer tried valiantly to save Michael by diving in the way of Akroma, but it didn't help. Michael was down to 7. Richard was at five, and pushed his Lavamancers and Tims at Richard. He could do enough damage to win, but Richard had been resisting all attempts at taking any more pain. That was too much for Michael, and he called for an appeal from the DCI. The appeals board stepped in briefly and provided the standard answer, "We'll get back to you in 4-6 weeks." Well, at least Michael still had two more turns.

Or so he thought. Akroma came over for another blow, but Richard stopped the blood-lusting Mary for a second to cast Giant Growth. She went wild, attacking Michael's lands, creatures, graveyard, and finally him.