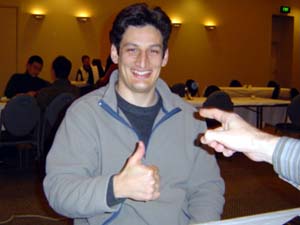 Romans and Chris Nadebaum are both regulars to the Nationals scene, as both have previous Top 8s finishes. Greg's was way back in 1997 while Chris recorded his in 2003, so it's literally the old man against the young man.

Greg had toyed with his pet Deathcloud deck for the last month after finishing one ranking position outside the invited players and was determined to grind in, but to no avail. In a last-ditch attempt to play at Nationals, he switched to a friend's Ravager deck for the final grinder and rode it all the way into the Top 8.

Chris won the roll and played, so he was at an advantage already with both Ravenous and Chittering Rats ready to come party.

With a Wayfarer's Bauble, Chris opened with the land acceleration he needed for Deathcloud , but Greg got a little scary in his turn with a fairly classic Ravager opening: Blinkmoth Nexus, two Welding Jars and Chromatic Sphere, one short of the Frogmite he tabled to give an idea of what's coming. (Actually he miscounted his Affinity, but we'll give him that one.)

With a second land drop from Chris to bring the Bauble online, this gave Greg the opening to play, in Greg-speak, "Orthicopter," followed by the previously mentioned Frogmite.

Then came the pain from Chris with the first of two Chittering Rats - Greg cycled his Chromatic Sphere to gain back the card and was hoping for an opening, but instead burnt for one and went boof with a Frogmite.

A second Chittering Rats meant that Greg's land drops were being stunted and a Rotlung Reanimator from Chris applied more pressure. Greg played an Arcbound Ravager, and on the next attack from Chris, the Ravager did its duty and ate Greg's obliging blockers.

Greg now had a 3-3 Ravager and a freshly cast Disciple of the Vault to at least make Chris think about his attacks; but a Smother for the hungry one ended it for Greg without him bothering Chris' life totals - a most unusual occurrence for Ravager.

Before moving on to Game 2, Chris sideboarded in four Shattered Dreams for Visara the Dreadful, two Solemn Simulacrums and a Wayfarer's Bauble. Greg swapped out a Somber Hoverguard and three Pyroclasms for four Mana Leaks.

Greg was light on land in the second game but he kept his hand on the strength of faith in his deck . . . but after Chris raced to four land and Greg was stalled on one, the easy choice of casting Deathcloud for one stunted him up badly. The board ws now Welding Jar against three Swamps.

Chittering Rats compounded things for Greg, but at least he didn't have to discard any cards -- at this point, Greg asked to say hi to his brother Dan in China, as he didn't have much else to do . . .

Another Chittering Rats meant another discard phase from Greg was avoided, and the Rats plus a Simulacrum started swinging in for damage.

Finally Greg's lands appeared and he was able to bust out a Somber Hoverguard and a Disciple of the Vault -- but Dark Banishing and Smother ended those hopes and Chris activated Nexus to swing for seven damage. 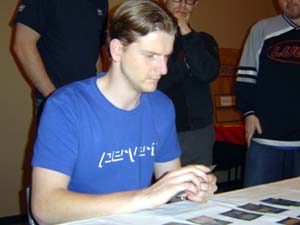 Two freshly cast Arcbound Ravagers from Greg stood in front of the still-swinging Chittering Rats, with Jens coming through unblocked with the Nexus. Chris lamented that he wanted to draw a card to gas up again, but Greg didn't have any sympathy for him, as he was at five life with three damage from unblocked creatures.

Damage resolved and a lone Ravager remained against Jens and a Nexus, with Greg having only two life with which to play. Another activation of the Nexus took him to one and Greg peeled . . . a Darksteel Citadel, which he used to cycle the Chromatic Sphere looking for fresh hope. But all he could do was extend his hand, giving Chris Nadebaum the playoff for third and the third slot on the Australian Nationals team.