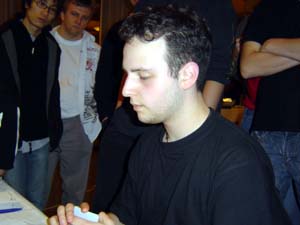 Tim He wins the die roll and elects to play, beginning the game by mulliganing his opening hand. He thinks long and hard about his next grip of six, finally deciding that its good enough. Michael Kotchoff is happy with his and the game gets underway with a first turn Birds of Paradise from Kotchoff. A turn-two Stone Rain is met with a cycling of Eternal Dragon before it resolves and He's Seat of the Synod goes into the graveyard. Eternal Witness gets back the Stone Rain and comes crashing in for two after He drops down a Wayfarer's Bauble. The Stone Rain is used once again to knock He down to a single land and Kotchoff passes the turn.

He fails to draw a land and is forced to cast out another Bauble. The witness comes in for another two and is backed up by another Witness, returning the Stone Rain again. The two of them come crashing into the red zone and when Kotchoff casts the Stone Rain the game ends.

He is happy with his opening 7 this game and this game it's Kotchoff who is forced to take a mulligan. Happy with his next six the game gets underway, with He plain-cycling his Eternal Dragon at the end of the second turn. He plays out a third turn Sacred Ground while Kotchoff plays out a third turn Sword of Fire and Ice. Thirst for Knowledge forces He to discard Rewind and a second Sacred Ground. Kotchoff has no play and passes back with He playing out a Wayfarer's Bauble. 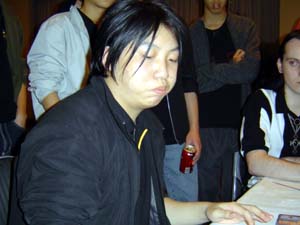 An Arc Slogger from Kotchoff is met with a Mana Leak from He. Pyric Spellbomb comes into play for Kotchoff and it is instantly exploded for a card. Eternal Witness is summoned and returns the Arc-Slogger when resolves in play. At the end of the turn He explodes the Bauble and plays out a Temple of the False God, passing the turn back. Kotchoff equips the Sword to the Witness and then charges into the red zone. Degree of Justice is cycled by He and the tokens block the Witness. After the combat phase Kotchoff drops down the dug back Arc-Slogger.

He is forced to cast Wrath of God to remove the freshly summoned Arc-Slogger from play and Kotchoff plays out a Troll and then straps the sword to it. He responds with an end of turn Thirst for Knowledge, pitching an Ancient Den. He is once again prepared with a Wrath of God to take down the troll. Eternal Dragon is returned during his next upkeep, and He passes the turn back across to Kotchoff. Molten Rain targeting a Temple of the False God deals He two damage and returns straight back to play thanks to the Sacred Ground. A Plow Under is met with Confound, allowing He to shift the top two cards of his library to the bottom. Decree of Justice is cycled for 8 soldiers and Kotchoff bolts one to drop the count down to 7. He plays out an Eternal Dragon during his main phase and Kotchoff scoops up his cards.

He plays out a turn one Wayfarer's Bauble and Kotchoff stalls on two lands, allowing He to search out an Island. He plays out a Temple of the False God and Kotchoff fails to find a land with He casting Thirst for Knowledge during the end step, discarding Plains and a Vengeance. Kotchoff is forced to discard Sword of Fire and Ice and then passes the turn across to He. With no play during his main phase He sends the turn straight back and once again Kotchoff fails to find a land. Kotchoff does however find a Pyric Spellbomb, and sacrifices it for a card, finding a land and playing it. 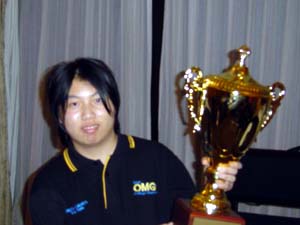 He cycles his decree for 3 soldiers and passes the turn back to Kotchoff, who casts down a Troll Ascetic and He casts another Decree of Justice this time cycling off for 5 tokens. He sends them into the red zone on the next turn and drops Kotchoff down to 13. Kotchoff attempts to cast a Witness and in response He sacrifices off a search land and then casts Thirst for Knowledge ditching a Den and then casting Mana Leak. He attacks with his tokens once again one is blocked with the rest getting through dropping Kotchoff down to dangerously low levels. Kotchoff casts an Eternal Witness and returns the Spellbomb before casting it again but its all too late, He flips up another Decree of Justice and it's all over.

Tim He is Australian National Champion for 2004!