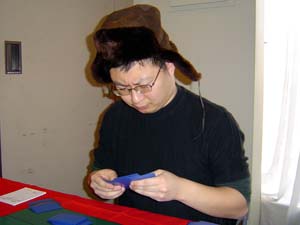 Seck has come to the feature match area equipped with a nice earflap hunting hat. He says that's the key for him, keeping him on his toes and that it makes him feel like a character from Fargo. Chris Allen on the other hand says that it's no big deal as he's played Satoshi before, a player famous for his hats. Allen reflects for a moment, "Hey wait…. he beat me… maybe it was the hat".

Allen lost the die roll and Seck elects to play first. Fully aware of the ramifications of being a feature match Allen chooses to flip the play mat.

Seck elects to keep and Allen does the same, play gets underway with Seck dropping Great Furnace and two Ornithopters. Allen drops down a Seat of the Synod and drops down an Arcbound Worker. Seck then plays the Vault of Whispers and a Chromatic Mox with no implant, following it with a Worker of his own and then a Myr Enforcer, leaving him with a single card in hand on turn two.

Seat of the Synod for Allen is followed up with a Ravager. Seck Night's Whispers to draw two cards and then drops down another Worker, a second Myr Enforcer and a Blinkmoth Nexus, emptying his hand. He decides to send with an Ornithopter, the Worker and his Myr Enforcer. Allen's worker jumps in front of the Enforcer, Ravager blocks Seck's worker and gains some counters as his own Worker is sacrificed to him. Seck passes across the turn and Allen plays Thoughtcast for its real casting cost of a single blue thanks to all his artifact land and Ravager. He drops out another Arcbound Worker and a Chromatic Sphere, tapping him out but leaving 4 cards in hand. Seck does nothing but send in his Blinkmoth Nexus, dealing Allen 1 damage. Allen drops down a Frogmite after playing Thoughcast and sits back to ponder the board.

He then plays out his Nexus and a Pyric Spellbomb. Seck sends in his Nexus, and Allen activates his own Nexus and blocks. Damage goes onto the stack, Seck has no effects and Allen sacks his worker to the ravager and puts the counter on the Nexus keeping his alive while destroying Seck. Allen plays out another Nexus and plays out Cranial Plating. He animates his Nexus and straps on the Plating, slamming it into the red zone as an 11/2 monster. Ornithopter steps up to chump block and Allen passes the turn.

Seck drops out a Frogmite and sends in his Worker all on its lonesome. Allen takes the two damage and drops down to 17. Welding Jar joins play for Allen, he pumps red through his Chromatic Sphere and tries to Spellbomb the Ornithopter. It resolves and the Nexus is animated and has a Cranial Plating strapped to it sending it to 12 power. Seck decides to let it come through and with no help from his draw phase he decides to scoop 'em up 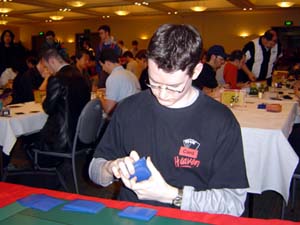 Seck once again elects to play first but Allen decides to send his hand back. After seeing his next grip Allen comments "worst 6 ever" sending them back too. Seck starts out with a Chrome Mox, imprinting Thoughtcast, and then plays out a Dwarven Blastminer first turn, hoping to destroy Allen's mana base. Allen plays out a Welding Jar and a Nexus, using the Welding Jar to protect his Nexus from an upkeep happy Blastminer. He doesn't draw the red land to make bolting the miner possible and passes he turn after playing out his Vault of Whispers. Seck drops out two Frogmites and then once again uses the Blastminer to eat a land, this time it works destroying the Vault. Allen plays out a Seat of the Synod and then an Arcbound worker, Taking 5 as the Nexus from Seck and the two Frogmites crunch in.

Seck's Blastminer eats the Seat of the Synod and but this time Allen draws a Glimmervoid allowing him to Electrostatic Bolt the Miner and sending in the Arcbound Worker for one point. Seck animates his Nexus and deals another 5 damage with the two Frogmites. Allen plays out a Nexus and uses the Glimmervoid to Detonate the Chrome Mox. During the second main phase Seck bolts the Worker and Allen makes a Nexus a creature and puts the counter on it. Seck drops out an Ornithopter and sends again for 5 damage. After checking his next card Allen scoops.

Both players choose to keep and Allen stars off with a Vault of Whispers and an Arcbound Worker. Seck opts to detonate Allen's Vault and passes the turn. In marches the Worker and Allen drops down a Seat of the Synod. Seck finds a Seat of his own and plays out a Ravager and a Chrome Mox with no imprint. Allen plays down a Great Furnace and Bolts the Ravager following up with an attack phase and a Chromatic Sphere. Seck Thoughcasts and then drops out a Blastminer and a free Frogmite.

Allen Thoughcasts and then drops out a Nexus, using a second bolt to knock out the Blastminer before it can cripple his mana base. Seck continues with his land destruction policy, detonating the Great Furnace and dropping down an Arcbound Worker, sending his Frogmite into the red zone. Allen elects to take the damage and Seck passes the turn. Allen plays out a free Frogmite and drops a Seat as a land, before turning his Nexus into a creature and sends the worker and the Nexus into the zone. The two Workers trade off and both players move their counters into the Frogmites. Frogmite charges in and Allen elects to take it on the noodle, with Seck following the attack phase with an Arcbound Worker. Nexus and Frogmite come in and Seck elects to move the counter to the Frogmite when his worker chumps off. Allen channels red mana through his Chromatic Sphere and then bolts the almost safe Frogmite.

Nexus and Frogmite come charging in for Allen dropping Seck to 12 life. Seck plays out a Blastminer and thinks long and hard before passing the turn. Allen has another bolt for the Blastminer and attacks for 4, playing out a Welding Jar before passing the turn. Seck plays out his Cranial Plating and then Bolts the Frogmite during Allen's upkeep forcing him to sacrifice the Welding Jar. Nexus comes in on its own equaling the life scores at 7 life. Allen drops out a Myr Enforcer and passes the turn. Seck drops down an Arcbound Worker and then places cranial plating on it. Allen simply Detonates the worker and sends with his force dealing lethal damage.