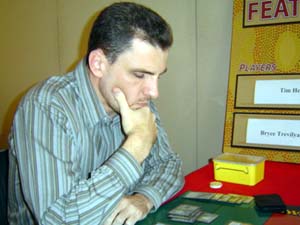 winning the die roll Tim He elects to play first. Sunbeam Spellbomb is the first card down for Bryce Trevilyan and it is met by a second turn Bonesplitter from He. An optimal turn two Lightning Greaves comes into play for Trevilyan and he attempts to summon a Grimclaw Bats but it is met with a Condescend from He.

Vulshok Berserker is the first creature to make it into play and it deals 3 points of damage to Trevilyan. Trevilyan finds a third swamp and uses it to play out a Fleshgrafter, he pushes the Greaves onto it but elects not to attack. He puts the splitter onto the Berserker and comes slamming into the red zone again. Fleshgrafter blocks, trading the two off and He follows up with a Quicksilver Behemoth thanks to two Vault of Whispers. Trevilyan plays Neurok Familiar however it flips over a Terror instead of an artifact, a card that would have obviously been useful in dealing with the 4/5 monster.

Trevilyan dumps out a Healer's Headdress, and He attacks with his Quicksilver Behemoth and playing down Wayfarer's Bauble and the Behemoth again and strapping the Bonesplitter back on. Trevilyan dumps out a Flayed Nim and puts the Greaves onto it deciding to keep his team at home and not attack with the Familiar. When He comes in with his Behemoth Trevilyan uses the Familiar as a chump blocker and forces the Behemoth back to He's hand. Once again the Behemoth comes down and gets the Bonesplitter attached to it with He passing the turn.

Trevilyan sends in the Nim and He takes the damage, dropping him to 18 life. Trevilyan follows up with a Slith Bloodletter and moves the Lightning Greaves onto it. Exploding the Bauble at the end of the turn nets He an Island, which he uses to summon an Advanced Hoverguard. Popping his Spellbomb for a card Trevilyan then sends in the Nim dealing another two damage. Trevilyan then moves the Greaves off his Bloodletter so that he can move on the Healer's Headdress and then attaches the Greaves back on. He shifts the Splitter across to his Hoverguard and comes in for 3 damage, thanks to Trevilyan's makeshift healer. He then plays out a Goblin Archaeologist and passes the turn across to Trevilyan.

In comes Nim and this time He bites, Trevilyan regenerates the Nim and the Quicksilver Behemoth bounces back up to He's hand. The next attack phase for He results in the same effect as the last with the healer preventing a damage and dropping Trevilyan down to 5 life.

Behemoth makes its return to play. Trevilyan attempts to cast a Clockwork Condor but it is met with an Annul from He sending it to the graveyard instead of the battlefield. Another attack from the Hoverguard sends Trevilyan down to two life. A Spire Golem looks to keep Trevilyan alive until it is met by a Condescend from He, who simply attacks with his Hoverguard to end the game.

Trevilyan gets us underway in the second game but its He who casts the first spell with a Wayfarer's Bauble. Trevilyan plays out a turn two Vedalken Engineer and passes back. After playing out his second land He passes the turn with Trevilyan using his fast mana to exceptional effect casting a Spire Golem. He simply explodes his Bauble to fetch out an Island and passes the turn back to Trevilyan who uses the engineer to cast out Lightning Greaves and then attempts to play a Fleshgrafter, but it is met with a Condescend from He. The Greaves get attached to the Spire Golem and it comes in for two damage. He taps himself out to play down a Berserker and comes in for 3 damage.

Trevilyan summons the Nurok familiar and this time it flips a Swamp, still not an artifact but better than losing a Terror that's for sure. Trevilyan moves the greaves onto it and comes in to the red zone and after the attack uses Terror to remove the Berserker. He plays out a Neurok Spy and then a Bonesplitter and passes the turn back to Trevilyan. His flying air force comes in for another three damage and he uses Echoing Ruin to get rid of the splitter before things get nasty.

He sends in the Spy and casts out an Advanced Hoverguard. Trevilyan plays out Slagwurm Armor and sends his Spire Golem red zone. Atog joins play for He along with an Aether Spellbomb, with the spy coming in unopposed for another two damage. Surestrike Trident gets Annuled by He and Spire Golem goes into the red zone for another attack. He sends in his spy and passes the turn to Trevilyan with a single card in hand. Trevilyan plays out a Clockwork Condor and in response He pops his spellbomb for a card but finds nothing to stop it coming into play. The Greaves move across to it and in come the Spire golem and the Condor, with Hoverguard blocking and trading with the condor. Spy comes in for He and he summons down a Behemoth. Trevilyan attacks with both the familiar and the spire golem before dropping out a Copper Myr and moving across the Slagwurm Armour to it. Sitting on a tiny two life He has no choice but to move all his creatures into the red zone. Trevilyan is only on 9 life so he decides to push the Myr in front of the Behemoth and the Engineer in front of the Atog to prevent any desperate attempts to deal damage. Unable to deal enough damage He scoops up his cards and the two head to Game 3.

He elects to play first in the final game and starts off once again with a first turn Wayfarers Bauble. Trevilyan follows up with a first turn Slagwurm Armour and then a second turn Healer's Headdress. He explodes his Bauble and finds a mountain, summoning out his Vulshok Berserker and pushing it into the red zone. Trevilyan uses terror to knock it off the board and He plays out Neurok Spy and an Atog. 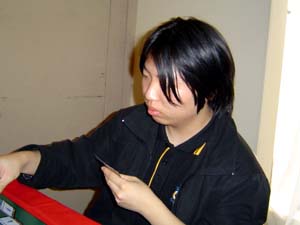 "Tick Tock" comments Trevilyan, in reference to the Neurok Spy clock, as he begins his turn and drops down Scream from within on the Spy. He plays out Bonesplitter and attaches it to the Neurok Spy sending it in for damage. Trevilyan plays out Grimclaw Bats and straps Slagwurm Armour to it. He attacks straight into the bats and the Atog bounces right off it, but his Spy gets through for another three damage. Trevilyan attacks with his Bats and then casts a Fleshgrafter, strapping the Healer's Headdress onto it. Neurok Spy comes in on its own again and He passes the turn back across. Trevilyan brings the Surestrike Trident into play and straps it onto his Grimclaw Bats before passing the turn. He plays the gamebreaker, Hoverguard Sweepers, knocking all of Trevilyan's creatures back to his hand and then simply attacks for the win.