Share Article
Share Tweet Share
the first game the two players discussed positions in the draft and who did what and why. Chris Nadebaum spoke of how he screwed a few people in his first draft by taking white in the first pack, despite there being very good white and cutting it off for the rest of the draft. Alex Brown was reasonably happy with how his draft went and said that he was happy with how the people around him had drafted.

Brown gets proceedings underway with a first turn Viridian Longbow and Nadebaum counters back with a second turn Cranial Plating. Copper Myr from Brown gives him something that he can use to do some equipping. Goblin Brawler comes into play for Nadebaum who passes the turn, with Brown dumping out a Viridian Acolyte and a Thermal Navigator. Nadebaum plays out a Grimclaw Bats and then straps Cranial Plating onto them, passing the turn. Brown sends in the Acolyte and the Navigator and then equips the Silver Myr with the Longbow. Magma Jet from Nadebaum on the Myr forces Brown to ping the bat in an attempt to kill it. Nadebaum simply pumps his creature and Brown sacrifices the Myr to the Navigator so that the Jet fizzles. 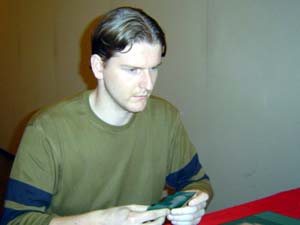 Arresting the Bat and then using Stasis Cocoon on the Plating puts a stop to Nadebaum's army and Brown attacks with his two creatures. Nadebaum summons down an Arcbound Hybrid and then attacks. Brown simply shifts the Longbow onto his Acolyte during his turn and then ends it. Nadebaum uses Terror to take down the Acolyte, which pings him in response, then sends his two men into the red zone and the two artifact creatures trade off. Krark-Clan Ogre comes into play and spells the end for Brown, who scoops up his cards.

Brown starts off Game 2 first and plays out a second turn Silver Myr and follows it up with a turn three Pentad Prism. Nadebaum plays out a turn 3 Thermal Navigator and passes the turn. Using the Prism to get a black mana Brown plays out his Opaline Bracers. Nadebaum attacks in with his Navigator and uses Echoing Ruin to remove the little Silver Myr. Brown brings down a Thermal Navigator of his own to match Nadebaum but can find no other land to play. Dross Golem comes into play for Nadebaum for 4 mana which is "Very efficient" according to Nadebaum as he passes the turn. 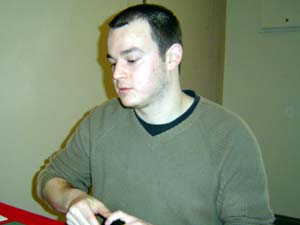 Brown straps the Bracers onto his Navigator and casts out his Sylvok Explorer. Casting Rain of Rust on the Navigator allows Nadebaum to come slapping into the red zone. Brown begins to take control dropping a Stasis Cocoon onto the Golem and then a Leonin Bola. Nadebaum continues to lay the beats dropping out a Grimclaw Bats and sending in his Navigator for two. Brown plays out a Tel Jilad Wolf and passes the turn, using the Bola to tap down the Bats in Nadebaum's attack step. Nadebaum sacrifices the imprisoned Druss Golem to his Navigator to give it flying and sends in for two. Brown tries to play out a Skyhunter Cub and strap the Bracers onto it but Nadebaum casts Irradiate in response sending it to the yard.

With Brown tapped out and unable to use his Bola, Nadebaum double pumps the bats and sacrifices an artifact land to give his Navigator flying, dropping Brown down to a single point of life, he then plays out Arcbound Slith before passing the turn. Brown straps his Bola onto his Explorer and plays out an Viridian Acolyte. Nadebaum dismantles the Braces and attacks with his two creatures to end the match