Chris Aitchison gets the game underway with a Vedalken Engineer and plays out a third turn 3/3 Skyreach Manta. Ben Yuill plays down a third turn Trinket Mage and uses it to search out his Leonin Bola before passing the turn back across. The Manta comes in for three damage and Elf Replica and Energy Chamber comes into play for Aitchison. Yuill plays out the Leonin Bola and then equips Trinket Mage with it, tapping down the Skyreach Manta in the next attack phase. Energy chamber puts a counter on the Elf Replica and Aitchison plays out a Darksteel Ingot to further develop his board. Yuill brings out 4 1/1 creatures using Beacon of Creation and straps the Bola back onto his Mage, passing the turn back. Energy chamber puts another token onto the Replica which gets tapped down during the attack phase, and the Manta comes in on its lonesome. Crystal Shard is summoned after combat to reinforce the comment made before the match about his deck being "all land and bombs". 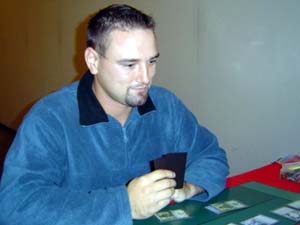 Yuill attacks with his four tokens and everything seems fine until he casts his first Echoing Courage and then a second, dealing 22 damage to Aitchison in the one turn.

"I can't believe that I just drew that, at least I did it during a feature match" Yuill said.

This time Yuill is forced to mulligan but is happy with his second grip. Aitchison starts out with a turn one Razorgrass Screen and Yuill responds with a Pentad Prism, putting two counters on it. Aitchison plays out a Journey of Discovery searching out an island and a plains. Ensouled Scimitar comes down into play for Yuill and he passes back the turn with Aitchison playing out a Darksteel Ingot and a Vedalken Engineer. Yuill casts Dawn's reflection on his Forest and uses the mana to animate his Scimitar and send it in to the red zone. Aitchison plays out a 5/5 Skyreach Manta using all the colors of the rainbow.

Yuill plays out a Bola and a Longbow and animates his Scimitar to shoot the little Engineer. Yuill then passes the turn and is greeted with a 5/5 Manta in the red zone. Animating his Scimitar again this time Yuill sends it in for some damage and plays out Tel-Jilad Wolf. Aitchison then casts a Tangle Spider at the end of the turn and uses 4 colors to cast an Infused Arrows and then plays out an Elf Replica. Aitchison sends in his Tangle Spider and the Manta, with Yuill animating his scimitar to block the Manta and taking 3 from the Tangle Spider. Yuill casts an 8 point fireball targeting the Manta and then passes with Aitchison simply attacking with his Tangle Spider, dropping Yuill to a single point of life. After failing to draw anything useful Yuill concedes the match.

Yuill decides to play first for the final game and thinks long and hard about his opening grip. After deciding to keep it he plays out a first turn Steel Wall. No other spells are played until a third turn Journey of Discovery from Aitchison, netting him a Plains and a Swamp. At the same time this filled his hand forcing him to discard an Elf Replica. Yuill then plays out a Opaline Braces, putting three counters on it thanks to his forest, island and mountain opening three lands. 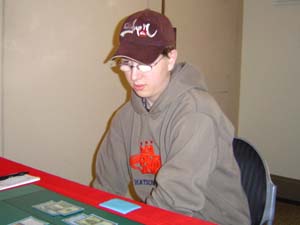 The two continue to build their resources with Aitchison playing out his Darksteel Ingot. Finally a creature enters play with Yuill summoning a Trinket Mage, searching for his Bola and playing it and attaching it to the Wall. When Aitchison plays out a 5/5 Manta it gets tapped down at the end of the turn allowing Yuill to attach the Bracers to his Mage and attack for 5 damage. During the next attack phase the Manta is tapped down again and Aitchison plays out an Arcbound Bruiser and a Vadalken Engineer. The Bruiser dives in front of the giant mage and transfers all its counters onto the Manta, which is tapped down by the wall before the attack phase. Pentavus comes into play for Aitchison as well as a Tangle Asp, to which Yuill responds with an end of turn Tangle Spider. Pentavus meets up with a five point Fireball and Yuill passes the turn.

The Manta is tapped down by the wall and Crystal Shard comes into play bouncing the tapped out Yuill's Tangle Spider. Yuill plays out a Manta of his own for three and passes the turn. Aitchison's Manta is tapped down during the attack phase and Yuill shifts the Bracers across to his own Manta, sending the monster in for six damage and dropping Aitchison down to 9 life. The wall taps down Aitchison's Manta allowing Yuill to attack with his own Manta. Beacon of Creation brings in 3 1/1's and is shuffled back into Yuill's library. When the manta gets tapped down Aitchison bounces it to his hand in an attempt to get a blocker, but its tapped down again during Yuill's turn for the end of the game and the match.