Justin West starts off the first game with a mulligan but is happy with his second hand, Andrew Corney thinks for a while before deciding that his hand is good to go. West starts off with a first turn Blinkmoth Nexus and Corney responds with a comes into play tapped Tranquil Thicket. Casting an end of turn Magma Jet on turn two west then swings in with his Blinkmoth Nexus. Corney has an answer with Oxidize and follows up during his own turn with Rampant Growth searching out a Forest.

West finds a mountain at the top of his deck and bangs down, Slith Firewalker sliding in for a damage and gaining a counter. When it comes in again during West's next attack phase it is sent to the graveyard thanks to Starstorm. Sulfuric Vortex is summoned to start the clock for both players ticking. Corney is unphased playing out a Siege-Gang Commander and passing across, the turn. A Shock deals with the Commander, leaving only his lackeys in play to trouble West. 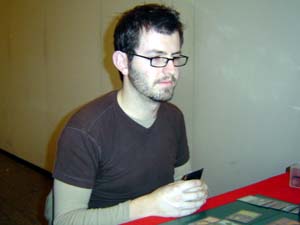 Two goblins come in for the attack with Corney leaving one behind to hold down the fort. After the attack phase he casts a Lay Waste on the mountain and then Eternal Witness getting back his Siege-Gang Commander. West plays a Shock at the end of the turn targeting the Eternal Witness and then drops down a Wooded Foothills, sacrificing it for a Mountain.

Pulse of the Forge with bounce removes one of the Goblins and Corney brings out another Siege Gang commander. West decides that he's done for and its time to move onto game 2.

Starting off the same way as the first West begins the game with a mulligan, however this time he is forced to ships back his second hand dropping down to 5 cards. West stalls on a single mountain and passes the turn without playing a second land. Corney casts Rampant Growth on turns two and three giving him to a stockpile of mana to choose from. Despite finding his second mountain West has no play in his main phase, sending the turn back across. Corney drops down a Ravenous Baloth and West simply draws and passes the turn again.

The Baloth comes charging in and Corney plays out Lightning Rift. West plays out his third Mountain and summons a Slith Firewalker sending it in to the red zone. Corney has an answer in a Plain cycled Eternal Dragon that allows him to Lightning Rift the poor critter. Rampant Growth gives Corney a plains and gives him the power to return the Dragon to his hand and cycle . West plays and sacrifices a Wooded Foothill searching out a Mountain and playing Oxidda Golem. Corney simply cycles a lay waste and zaps the Golem for two damage. Shrapnel Blast sacrificing the Golem allows West to deal 5 damage to the Baloth, however it is sacrificed in response. 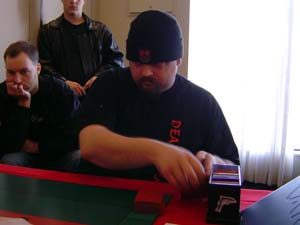 A fresh Baloth comes into play for Corney on his next turn and the pressure is back on West to find an answer. Blistering Firecat comes into play but it is removed with a cycled Forgotten Cave. Corney plays out a Vine Trellis and a Viridian Shaman, West plays out Pyric a Spellbomb. Shock removes the Shaman and Shrapnel blast sacrificing the Spellbomb allows West to deal with the Baloth. Viridian Shaman once again comes into play for Corney. Corney returns the dragon in his upkeep and passes the turn, with West directing Pulse of the Forge at him at the end of turn. Corney cycles a Tranquil Thicket at the end of the turn and as he is announcing West as the target he concedes the match.