Joe Connolly starts off play with a Skirk Prospector and Chris Nadebaum plays out a Wayfarers Bauble. Connolly drops out his City of Brass and uses Oxidize to remove the bauble. Ravenous Rats from Nadebaum forces Connolly to discard a Clickslither from his hand. Sacrificing his Prospector, Connolly brings out Goblin Warchief and comes across the red zone. Nadebaum casts Dark Banishing on it during his main phase and attacks back with his rat. Connolly draws and sacrifices a Wooded Foothills grabbing a mountain and summoning Goblin Sharpshooter. Nadebaum plays out a Blinkmoth Nexus and drops Chittering Rats, attacks with the Ravenous Rats and passes the turn.

Connolly shoots down the Rats with his Sharpshooter and plays out a Prospector and passes the turn. Nadebaum sends in his Chittering Rats, dropping Connolly down to 12 life. Another Ravenous Rats forces Connolly to discard Siege-Gang Commander from his hand and Nadebaum ends the turn. Prospector attacks back for Connolly and he passes the turn. A third Ravenous Rats from Nadebaum removes the freshly drawn Oxidize from Connolly and he passes, with the little machine gunner removing the rats. Connolly once again attacks back with his prospector and passes. Nadebaum attacks with his chittering rats and casts Solemn Simulacrum. 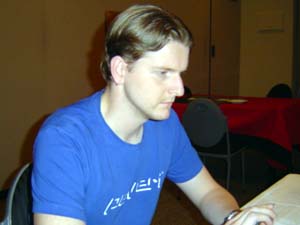 Connolly empties his hand playing out a Forest and then casting Clickslither and passes the turn back to Nadebaum. Dropping down Visara the Dreadful, Nadebaum passes the turn back and from fighting to be in control of the board it looks as though he now has total control. Connolly casts out Goblin Warchief and then sends in the Clicksither and it comes unopposed to deal 3 damage to his life total. Nadebaum attacks back with Visara, and then flashes consume spirit for the win.

Connolly gets off to a rocking start with a first turn Skirk Prospector, and a second turn Sparksmith. Nadebaum cycles away a Barren Moor and casts Ravenous Rats, forcing Connolly to dumps off Siege-Gang Commander. He then uses Sparksmith to kill it off before attacking with a freshly summoned Goblin Warchief and his Prospector. Nadebaum plays out a chittering rats and then passes back with Connolly using his Sparksmith to once again knock it off before sacrificing it for Siege-Gang commander and attacking all-in.

Nadebaum draws and scoops 'em up to the explosive goblin start.

Both players keep their decks the same.

Connolly starts out game 3 with a mulligan and after sneaking a peek at the top cards of his deck is convinced that his decision was the right one. Nadebaum starts out with a first turn swamp and Connolly lets rip with a first turn Goblin Sledder. When it comes into the red zone its met with a Smother and Connolly plays out another to replace it and a Wooded Foothills. Nadebaum plays out a Sword of Fire and Ice and passes the turn with Connolly exploding his wooded foothills to get a Forest.

Connolly drops down a mountain and attacks with his Sledder passing the turn back. Rats from Nadebaum force Connolly to discard a Clickslither and when he tries to strap the sword to the rat it is met with an Oxidize. Connolly untaps and plays out his Goblin Warchief, sending it flying into the red zone. Nadebaum Smothers the Chief and animates his Blinkmoth Nexus, sending it into the red zone all on its own. Connolly taps out during his turn to put down a Goblin Sharpshooter and sends the turn back to Nadebaum. Dark Banishing takes down the Sharpshooter before it can do any damage and it is sacrificed in response to boost up the Sledder. In comes the Nexus for a point of damage and Connolly attacks back with a warchief putting Nadebaum on 15 life. Consume Spirit for 3 on the Warchief is prevented by sacrificing it to the sledder to pump it up. Connolly drops down a Sparksmith and passes the turn across to Nadebaum. 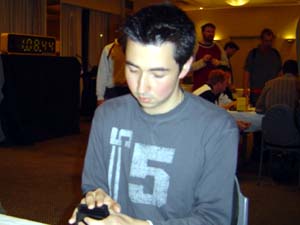 Chittering rats dump a card back to the top of Connolly's and Nexus comes in for another attack phase and Connolly uses his Sparksmith in his main phase to knock out the Chittering rats. Nadebaum casts out a Ravenous Rats causing Connolly to lose his Siege Gang Commander from hand. When Nadebaum animates his Nexus it is met with an Electrostatic Bolt from Connolly. Connolly attacks with his three little goblins and Nadebaum explodes a freshly summoned Wayfarers Bauble in the end step.

Nadebaum plays out a Consume Spirit for 5 aimed at Connolly and then sends the turn across. Connolly summons a Warchief and attacks with Nadebaum cycling a Barren Moor during the attack and then casting Smother on the warchief. Connolly shoots Nadebaum in response and then sacs it to the Sledder and shoots him. Connolly then attacks with the Sledder and the Sparksmith and passes back to Nadebaum. With Nadebaum on 5 life and Connolly on 2, he plays death Cloud for two and Connolly begins to shoot him with the Sharpshooter forcing the game into a draw.

Nadebaum starts out with turn one Barren Moor and Connolly starts out with turn one Sledder, which is Smothered in the following attack phase. Connolly then plays out a forest and a Goblin Pile Driver. Nadebaum casts a Chittering rats and uses it to block the Goblin Warchief that Connolly just summoned Deathcloud for two wipes the board clean of creatures and both players are playing off the top of their decks with two lands in play.

Nadebaum plays out a Blinkmoth Nexus and a turn later Rotlung Reanimator and then attacks with both a turn later. The Nexus meets up with Electrostatic bolt and Connolly finds a Sharpshooter having drawn a mountain on the previous turn and passes. Nadebaum cycles Barren Moor and then Dark Banishes the Sharpshooter, attacking with his Reanimator. Connolly drops out a Goblin Sledder and sends the turn back across with Nadebaum dropping down a Sword of Fire and Ice and passes the turn. Connolly attacks with his Goblin Sledder and then after much deliberation passes the turn. The Sword gets strapped onto the Rotlung and the attack destroys the Goblin Sledder. After drawing a card and finding no help Connolly scoops up his cards