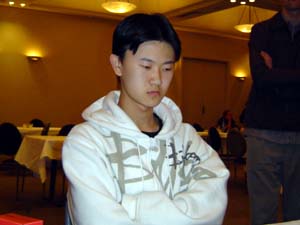 they're used to friendly matches at Melbourne's Card Heaven store, there was a little more on the line between David Zhao an Michael Kotchoff this time. Zhao has long been considered a bit of an heir apparent to the waning fortunes of the more-established Melbourne teams, while Kotchoff has lately put together some impressive finishes on the local scene.

Kotchoff was playing a Red/Green Land Destruction deck that has carried him to a 5-1 finish in the constructed portion, and Zhao is running mono-Red goblins (which he went 2-1 with - he intentionally drew three times after winning the draft portion!). Michael was using some interesting tech by including in the main deck.

Zhao won the coin toss and decided to play first. Both players kept their hands and Kotchoff led off with Bird of Paradise. Zhao got some early pressure with a Piledriver, but Kotchoff attempted to slow his opponent with Stone Rain. The Bird was later toasted with the cycling of a Gempalm Incinerator. Kotchoff got back the same Stone Rain with an , which then traded for the Piledriver. The same Rain came down again, but Zhao was able to get out a Skirk Prospector and a Sulfuric Vortex from underneath the land destruction.

Kotchoff replied with a and a , but an even bigger threat in the form of a Goblin Goon made things a little more complicated. Kotchoff then sacrificed the Spellbomb for a card, and with life total falling fast from Vortex, played an Arc Slogger and attacked with his troll. Zhao had an even more significant threat than the Goon in the form of a Siege-Gang Commander, which at this point threatened to end the game under a sea of goblins.

With his life total at six, Kotchoff needed to draw an answer before Zhao untapped, so he begun by shooting the Commander with his , which Zhao allowed, and then attacked with it, which was chumped by a goblin token. After the attack, Kotchoff attempted to stabilize by shooting the Prospector (to ensure than no more Siege-Gang shenanigans could happen again).

Zhao played a Sparksmith on his turn, but Kotchoff was having none of that and killed it with the Slogger at end of turn. With his life total at four, Kotchoff needed to form a plan quickly. He cast a Ravenous Baloth, shot another goblin token to make the Goon unable to block (bringing him down to four cards in his library) and attacked with the Troll and Slogger. This brought Zhao down to six in his upkeep, and he couldn't draw any significant defense in the face of Michael's army of beasts.

After boarding in Incinerators and Swords of Fire and Ice, Zhao was ready to go. Kotchoff brought in Swords of his own. The pace was furious, with Zhao casting a Prospector and Kotchoff a Birds of Paradise (which was promptly Incinerated). Another bird was cast in its fallen comrade's place, and Zhao has a lacklustre play of third-turn Sledder. Kotchoff's turn was more impressive with a , but Zhao more than made up for it in the form of a larger Goblin Goon on his fourth turn. 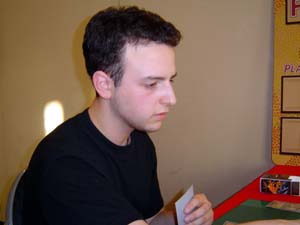 The next play from Kotchoff was devastating -- a coming down on the Troll, killing the Prospector and netting Kotchoff a card. Zhao attempted to rally with another Goon of his own attacking Kotchoff down to ten life. Michael's next turn had him attacking with the Sworded Troll (killing a Sledder), casting another Birds of Paradise, and a . Two Piledrivers tried to shore up Zhao's side, but one was promptly dispatched with an .

That move allowed Kotchoff to attack more safely the following turn, bring Zhao down to five life. With only land in his draw step, Dave conceded the match and the slot to Worlds.