Ben Seck starts out the first game with a mulligan, then follows up with Chrome Mox with no imprint, Seat of the Synod, Arcbound Worker and then Frogmite.. Cranium Plating on the second turn is met with an Annul from Goding. Pulse of the Grid from Kris Goding is burned to draw him two cards. Seck drops out a Myr Enforcer and Goding uses March of the Machines to remove all Seck's land. This doesn't stop Seck from smashing in for 7 points of damage, leaving Goding on a dangerously low seven life. Seck drops a Glimmervoid and prays that he can find some more to get around the March. Echoing Truth is the perfect solution for the Myr Enforcer and Electrostatic bolt removes the Frogmite. 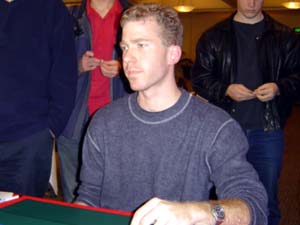 Seck plays out an Ornithopter and attacks with his worker however a Darksteel Ingot forces Seck to stay on the defensive. A Night's Whisper is met by a Discombobulate and a Pulse of the Grid bounces for Goding thanks to Seck's lack of lands and growing hand. An attack from Seck allows him to shift a modular token from his Arcbound Worker to the Ornithopter when it is blocked by the Ingot.

Serum Visions sets up Goding's library and he casts another Ingot and sends in the other one. Disciple of the Vault makes it into play for Seck, but an Obliterate on the next turn wipes the board clear, save the Ingots and finishes off the game.

Seck starts off with a first turn Glimmervoid and a Chrome Mox, imprinting a Shrapnel Blast using the two to summon an Arcbound Ravager. Ravager swings in for two damage and Seck casts a Night's Whisper, ending his turn. Goding draws, plays an Island and sends the turn back with Seck playing out a second Ravager. Goding casts Echoing truth when it gets into play, allowing Seck to sacrifice one to the other.

After untapping Goding plays out an Ingot with Seck playing out a Disciple of the Vault. Goding slams down March of the machines and Seck is forced to Shrapnel Blast off his Great Furnace and Sacrifice his Chrome Mox. Goding passes back the turn and Seck plays out a Blinkmoth Nexus and casts Night's Whisper. Seck attempts to cast an Ornithopter which is annulled, however Goding uses his Ingot, allowing Seck to attack for 5 points of damage. Ravager gets hit with Electrostatic bolt during Goding's turn, allowing Seck to sack it off for another point of damage. He then plays out a Seat of the Synod to deal Goding another point of damage, and then plays out an Arcbound worker, which makes it into play with Goding scooping up his cards.

Both players start the game with a mulligan, Goding gets the game underway with a turn one Serum Visions. Seck plays a turn one Vault of Whispers but doesn't cast anything until turn three dropping Arcbound Worker and Glimmervoid. He then casts a Thoughtcast and passes the turn. Goding casts a Flame Jet knocking out the Arcbound Worker, setting himself up perfectly to cast a March of the Machines and wipe out Seck's board. Unfortunately he can't find a fourth land to bring it into play and simply casts an Ingot passing the turn. Seck brings out a Seat of the Synod and then a Chrome Mox with no imprint. He then casts a second Thoughtcast and brings out a Somber Hoverguard hoping that March will not hit the table. 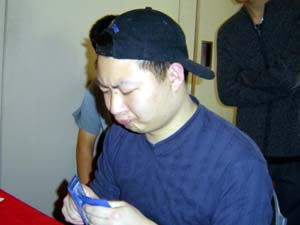 Goding plays out a second Ingot and passes the turn with Seck playing a Blinkmoth Nexus and then a Thoughtcast before attacking with his Hoverguard, knocking Goding down to 17 life. Seck drops down a Disciple of the vault after his attack phase and passes the turn, with damage protection if the March ever comes. Seck attacks with the Hoverguard and the Disciple, and Goding can do nothing but play a land and pass the turn back. Seck attempts to cast an Arcbound Ravager but it is met with mana leak, Seck then sends in his two creatures and casts a Myr enforcer.