After a draw in the die roll Greg Romans wins the second and elects to play first, but is forced to mulligan after drawing no land. He then begins with a Seat of the Synod and Michael Kotchoff plays out a first turn Bird of Paradise. Romans plays out another land and passes the turn with Kotchoff playing Stone Rain targeting the Seat of the Synod and ends his turn. Romans plays out Great Furnace while Kotchoff continues to summon bringing out a Ravenous Baloth. When it comes in for an attack on the next turn it is removed with Shrapnel Blast and is response is sacrificed for 4 life. Kotchoff has no problem with that and plays down a Contested Cliff and an Arc Slogger. Romans Shrapnel Blasts that creature as well but Kotchoff plays another Arc Slogger and passes. 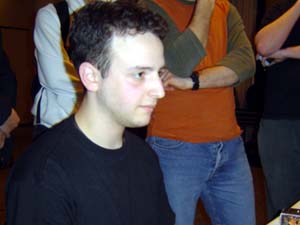 This time Romans has no way to deal with it and drops him down to 16 on the next turn. A Molten Rain forces Romans to lose his Glimmervoid and deals him two points of damage and he drops down a Pyric Spellbomb and sends in the Slogger and passes. Romans plays out a Chromatic Sphere and passes back with Kotchoff popping the Bauble to draw a card. Another Molten Rain on the Glimmervoid forces Romans to float a blue mana and Animate his Nexus. After taking another look at the board Romans concedes to the damage that the Arc Slogger will be able to deal him after shocking the Nexus.

Romans starts out with a first turn Ornithopter and a Seat of the Synod. Kotchoff starts off with his familiar play of a first turn Bird of Paradise. Following up with a Vault of Whispers and then a Thoughcast Romans passes the turn. Kotchoff plays out a Wooded Foothills and then casts Naturalize on the Seat of the Synod. Romans plays down a second Vault of Whispers and a Chromatic Sphere followed up by a free Frogmite. Romans decides to send in his Ornithopter for 0 points of damage as a laugh, which turns out to be his first attack phase of the match, and ends the turn. 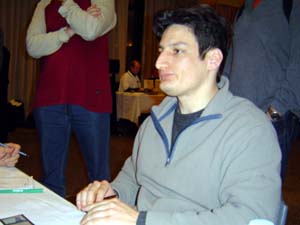 Kotchoff sacrifices his wooded foothills after his draw step and plays Eternal Witness, grabbing back the Wooded Foothills and dropping it into play. Romans washes a blue mana through his Chromatic Sphere, drops down a Blinkmoth Nexus and opts to take a point of mana burn. He attacks with the Frogmite and it is blocked by the Witness, with the two trading off. Kotchoff drops down a Pyric spellbomb and then blows it up, drawing a card, he then sacrifices his Wooded Foothills to dig out a Forest and brings down a Troll Ascetic.

Romans plays out a second Ornithopter and a second Nexus, animating the original one and sending it into the red zone. Kotchoff attacks back with his Troll and then Plows under the Nexii commenting that "You get to choose which order they go on". "Thanks for that", replies Romans. Kotchoff plays out an Arc Slogger and then passes the turn. Romans attacks with his Nexus and takes more beats from the Troll on the turn after. Kotchoff drops out a Ravenous Baloth and then a Pyric Spellbomb. Romans simply untaps and passes back the turn. In comes the Baloth and the Troll and Romans is forced to take it on the chin. A plow Under from Kotchoff ends the game right there.