David Crewe begins play after winning the die roll with a Seat of the Synod and double Welding Jar followed up with a second turn Disciple of the Vault thanks to a Vault of Whispers. Not to be outdone Michael Kotchoff starts out with a Wooded Foothill and sacrifices it fetching a Forest and playing out a Bird of Paradise. He then digs back the Foothill using an Eternal Witness and passes the turn back to Crewe. Continuing with the strong start Crewe plays down a Cranial Plating and straps it onto the disciple, sending it in for an attack. Kotchoff is more than happy to send the Eternal Witness in to trade and Crewe finishes his turn. 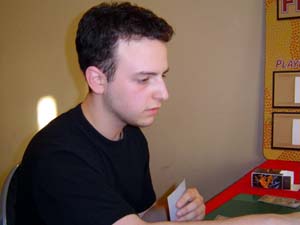 Kotchoff plays down a Troll Ascetic and when Crewe is unable to find a creature to play on his next turn, simply dropping a Pyric Spellbomb and a Chromatic Sphere, he swings across with it and plays out a Panoptic Mirror. Crewe plays out a Cranial playing and passes back with Kotchoff imprinting Molten rain onto the Mirror and targeting Crewe's Blinkmoth Nexus. After thinking for a moment Crewe decides that his best bet is to turn it into a creature and then use a Welding Jar to regenerate it. The troll attacks for another 3 damage and the turn passes with Crewe strapping the two Cranial Plating onto his Nexus and forcing Kotchoff to block with his birds. After combat he brings down a Welding Jar and an Ornithopter.

Once again Crewe is forced to protect his Nexus as it becomes the target of a Molten Rain from the Mirror, in addition Kotchoff digs back his Birds of Paradise with an Eternal Witness and summons them to prepare for another chump block. Crewe straps both the Platings onto the Ornithopter and attacks with the Birds jumping in front as predicted. When Kotchoff flashes a second Molten Rain in his hand Crewe is forced to scoop em up as the four damaged from the rains combined with the damage from the Troll and the Witness is enough to end the game.

Crewe once again plays first and starts out with a first turn Blinkmoth Nexus and Arcbound Worker, and follows with a turn two Vault of Whispers, Chromatic Sphere and second Arcbound Worker. At the end of the turn Kotchoff uses Oxidize to remove the Nexus and then casts Naturalize on the Chromatic Sphere. Crewe summons an Ornithopter and plays down a Great Furnace, attacking with his two little Workers. Kotchoff plays out a Troll Ascetic to slow down the bleeding and Crewe attacks straight into it, transferring one of the counters from his blocked Worker to the Ornithopter. 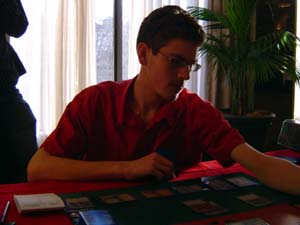 A Ravenous Baloth is summoned to hold down the fort and Kotchoff goes on the offensive, sending in his Troll. Shrapnel blast sacrificing a Worker allows Crewe to remove the Baloth, with Kotchoff sacrificing it in response, and add a token to his ornithopter, sending it in to the red zone. Kotchoff simply untaps and drops down another Baloth to replace the one that he was forced to sacrifice and sends the Troll in for more damage. Again Crewe has the Shrapnel Blast to deal with the Baloth but when Arc Slogger and Contested Cliffs come down the turn after he is in real trouble. An Arcbound Ravager is summoned but is forced to compete in the cliffs with the Slogger. Crewe is forced to let it go and with nothing to deal with the Slogger and the Cliff Crewe concedes the game and the match.