Share Article
Share Tweet Share
from the past Michael Doecke found himself playing against the teammate of former national champ Justin West who he had lost to in the first round. Supporting the exact same deck Andrew Grain must have felt pretty confident coming in to this match however he realized that his deck no longer had the surprise value it would normally contain. Grain is no slouch on the magic scene, having made the top 8 before as having a GP win to his name this would be an exciting match.

After winning the coin flip Doecke gets to play first but starts off the first game with a mulligan, rather than wait for his opponent to finish Grain decides to mulligan as well. "This hands a beating", comments Doecke as he elects to keep. "Is that good or bad?" replies Grain as he too elects to keep. "I don't know," says Doecke "I guess well see." 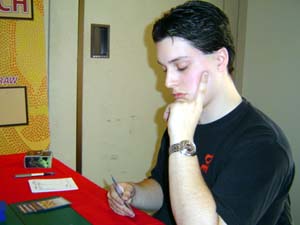 Reap and Sow with entwine deals with the Nexus and fetches Urza's Mine. Grain floats a mana into his pool in response while he waits for Doecke to finish shuffling. At the end of the turn he uses the mana to Magma Jet Doecke again, adding a Shock to the damage pile. Dropping down a morph ends the next turn for Grain as Doecke plays out a Solemn Simulacrum. Grain drops down Sulfuric Vapors putting Doecke on a short clock and passes the turn. Doecke hard casts his Darksteel Colossus and passes the turn back on a dangerous 8 life after being shot by the Spellbomb.

Grain thinks for a long time before passing the turn back to Doecke. Magma Jet knocks Doecke down to 4 life during his attack phase as the Colossus and Simulacrum charge into the red zone. Grain is dealt 9 points of trample damage as the morph jumps in front and two from the Simulacrum goes through uncontested. Doecke uses Sylvan Scrying to complete his Urza set but Grain scoops, knowing that his top card cannot do the extra two damage he requires to kill off Doecke before he dies the turn after. He later admitted that he had made a minor miscalculation expecting to use the card on top from the Jet to kill Doecke this turn. If he had placed the useless card on the bottom of his library he would have drawn a burn spell that would have put Doecke on 0 life.

Grain begins the second game with a mulligan but starts out strongly with another first turn Pyric Spellbomb. Doecke plays out an Urza's Tower and Grain explodes his Spellbomb to draw a card in his main phase, playing down a Wooded Foothills. Doecke plays out a Foothills of his own and sacrifices it for a Forest, using the freshly found land to cast a Talisman of Impulse. Grain chooses to search after his draw phase fetching a mountain and dropping out a Slith Firewalker, boosting its power after the attack phase. Reap and Sow from Doecke knocks out one of Grain's mountains before passing the turn. 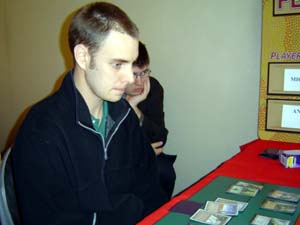 Once again the Firewalker comes in for an attack and Grain plays down Great Furnace to make up for the land he's just lost. Vine Trellis and an Oblivion Stone come into play for Doecke and he is hit in the face with Magma Jet as a reward for ending his turn. Firewalker charges headlong into the Vine Trellis and it is finished off with a freshly summoned and sacrificed Pyric Spellbomb. Doecke passes the turn and when the Firewalker comes in again Doecke explodes the stone.

Plow Under puts Grain's only two lands back on top of his Library and he takes two shocks to the face for his troubles. The Great Furnace is taken out with Reap and Sow with Entwine netting Doecke an Urza's Power Plant. He then casts Sylvan Scrying to complete his set with Urza's Mine and plays out a Talisman of Impulse. Grains Furnace is once again met with Reap and Sow with Entwine as Doecke searches out an Urza's Tower. On his next turn he casts out the Darksteel Colossus and Grain is forced to scoop.