Share Article
Share Tweet Share
Smith lost the coin flip and Jake Hart decided to play first. The two are full of conversation as they send banter back and forth. Smith comments that his deck is block and that he wishes he could run into some affinity decks as his was designed to crush them. Smith also asked me to make sure he didn't sound like a scrub this time as apparently the coverage I did of him for last nationals made him sound like he lost despite having a winning board position when this was not the truth. Unfortunately for him he's starting out this match with a triple mulligan

Hart plays out a temple of the False god and two Wayfarer's Baubles. Smith plays out a Viridian Shaman targeting one of the Baubles forcing Hart to sacrifice it. He then attempts to cast a Solemn Simulacrum a turn later. In response Hart casts Thirst for Knowledge and discards a Bauble, he allows the Simulacrum to enter play and then breaks the remaining bauble in play. Pyroclasm deals with the two creatures in and Hart plays out another bauble and pops it.

Crystal shard enters play for Smith and Hart decides its time to cast the Obliterate and powers straight out with a Bauble. Thirst for Knowledge is met with a condescend for one from Smith who jokes that he should have let him look at the cards before countering and then calling over a judge. The two then pass the turns back and forth with nothing to play but land. Smith tries to break the stalemate with Eternal Witness but Jake double Mana Leaks after Smith was able to pay for the first one. 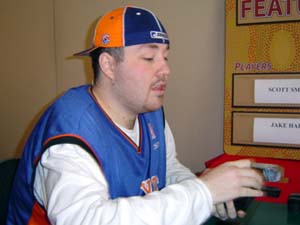 Solemn Simulacrum is met with an Annul and Reap and Sow destroys Harts Temple of the False god. Thirst for knowledge from Smith results in hid discarding an Oxidize and a Viridian Shaman. Creeping Mould targeting a mountain forces Jake to count his graveyard to check to see how many are left in his deck before he lets it resolve. A mould the turn later also targeting a mountain slides through. Hart plays out a Darksteel Ingot and Smith attempts to Condescend for three, which is met with a Mana Leak from Hart. Smith casts Thirst for Knowledge and discards condescend and another Viridian Shaman, digging deep into his library for threats.

Eternal Witness from Smith is meets a Rewind from Hart and he Echo's Truth to bounce a Shard back to Smiths hand. Simulacrum comes into play for Smith and he searches out a forest and ends the turn. Hart plays out another Ingot and passes the turn after the Simulacrum steps in front of the first Ingot. Hart uses his end step to cast Thirst For knowledge after his March of the Machines is destroyed by Creeping Mould.

Hart casts another march and Echoing Truth sends the two Ingots back to Harts hand. Creeping Mould deals with the March, leaving Smith with no more enchantment removal. Hart goes busty summoning three Ingots and leaving four mana open. Eternal Witness gets into play after a Rewind from Hart is Condescended by Smith. Echoing Truth sends back all the Ingots to Harts hand forcing him to summon two during his next turn. Another Eternal Witness gets into play, returning Echoing Truth and sending back the two ingots. Smith attacks with his two Witnesses and attempts to cast Crystal Shard but it is met with Annul. March of the Machines and two Ingots enter play for Hart and Smith casts thirst for Knowledge and discards a Simulacrum.

The four Ingots come in for the attack and Smith attempts to Echoing Truth two blocked ingots. Hart casts Condescend for 5 and it resolves with the two Witness' going to the graveyard. Thirst for knowledge from Smith forces him to discard Oxidize and Reap and Sow. After a quick check of his graveyard he realized that all four eternal Witnesses were in the graveyard and scooped up his cards as he could no longer win.

This time its Hart doing the mulliganing however he doesn't have to go as low down as Smith was forced to in the first game. Hart gets things underway with a turn two Darksteel Pendant. Unfortunately for Smith he is forced to start discarding on turn 4 having kept a bomb of a hand but not drawing a third land. During the discard step Hart casts a Thirst for Knowledge and then casts a main phase ingot. Smith draws a land but has no plays and passes the turn. 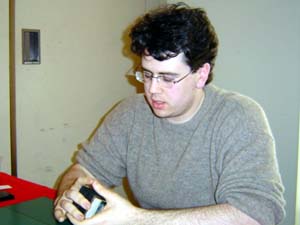 Hart plays out March of the Machines and attacks for 5 passing the turn across to Smith.
Holding his breath Smith plays down another forest to make enough mana to cast a Creeping Mould for the March of the Machines but of course it is met by a Mana Leak. Hart then drops another land, attacks, and casts obliterate and Smith simply concedes the match.