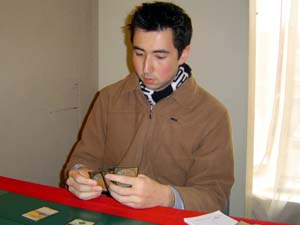 Trevilyan is one of the returning members from last year's nationals team. Joe Connolly seems to think that his deck is terrible and that the only redeeming feature is that soon he will be able to leave the tournament and go to the local casino that is located nearby.

Both players start with a turn one plains but Connolly gets things rolling with a turn two Leonin Squire, following up with a turn three Skyhunter Cub. Trevilyan summons a Leonin Den-Guard and Connolly sends his two into the red zone casting a Ferocious Charge to deal an extra 4 damage and let him scry his deck.

When Connolly has no turn 6 play he takes a beating from Trevilyan's men after refusing to block. Leonin Squire goes into the red zone and is blocked by the Myr, with a Test of Faith from Connolly forcing the two to stand off. Trevilyan slams back dropping Connolly down to 5 and casting a Skyreach Mantra.

Connolly reveals a hand of all lands before scooping up his cards.

Connolly elects to play again for Game 2 but is forced to start out with a mulligan. Connolly starts off with a turn one Bonesplitter to which Trevilyan responds with a turn one Auriok Glaivemaster. Connolly plays out a Vulshock Morningstar and passes the turn. Trevilyan plays out a Leonin Scimitar and straps it onto his dude sending it into the red zone. Connolly plays out a Pulse of the Tangle to create a dude and passes the turn back, with Trevilyan slamming in again and casting out a Pteron Ghost. Connolly attacks back with his pulse token before casting a Fangren Firstborn. 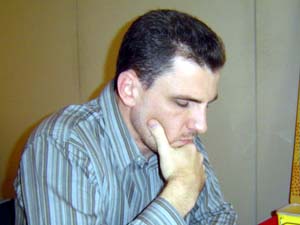 Trevilyan casts an Infused Arrows for three and then sends in his two men dealing four damage, sending the turn. When Connolly tries to strap on his Morningstar to the Fistborn, Trevilyan shoots it with two arrows , forcing Connolly to strap the Bonesplitter and the Morningstar onto his pulse token and sending it in for 7 damage. Rustspore Ram shoots down the Morningstar and Trevilyan's creatures come in for another 3 damage. Arcbound Hybrid is summoned and comes in for the attack and Connolly elects to block with his token and casts ferocious charge. Trevilyan straps the Scimitar onto his Ram and passes the turn. Connolly casts out an Alpha Myr and ends the turn with no cards in hard. Alpha Myr is met with an Oxidize as Trevilyan's creatures come into the red zone. The token blocks off the Rustspore Ram and Trevilyan shoots the token with the arrows. Leaving Connolly with nothing but a Bonesplitter

Connolly has nothing on the top of his deck and scoops.