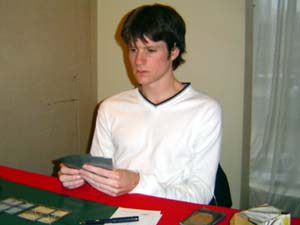 Romans sure did cut it fine last night making it into the nationals in the very last grinder of the evening. Tristan Gall has been a solid player for many a year now posting consistent results in almost every tournament he goes to. Romans admits that he's pretty happy with the draft and Gall was surprised that no one at all was really drafting green yet the one green deck he did see was really bad. "I'm playing green too," laughed Romans, "As you'll soon see".

Romans won the die roll and elected to go first and Gall is forced to send back his opening grip. Gall leads out with an Aether Spellbomb and Romans replies with a Joiner Adept. Gall explodes the Spellbomb in his main phase and passes the turn back. Spikeshot Goblin comes down to fight for Romans and he sends his Joiner in to the red zone. Gall plays down a Vedalken Shackles and passes the turn back. Cranium Plating comes in for Romans who straps it onto his Spikeshot Goblin and sends in the team to the red zone. Gall peeks at the top two cards of his library with Serum Visions and then plays out a Pteron Ghost. Romans plays out a Darksteel Ingot and then uses the Spikeshot Goblin to shoot the Ghost.

Gall draws and passes back the turn with Romans playing out a mountain and a Granite Shard. With Galls Shackles untapped he chooses wisely not to start an attack phase and simply passes the turn back to Gall who steals the Joiner at the end of the turn. He attacks back with the Joiner Adept and plays out Wanderguard Sentry and ends the turn, with the Spikeshot Goblin and the Shard pinging him at the end of the turn for 5 damage. Romans then brings out an Elf Replicator and ends his turn. Gall elects to untap the shackles but is forced to scoop em up after his draw phase reveals nothing.

This time its Romans turn to take a mulligan and Gall leads out with a first turn Serum Visions and Romans responds by dropping down a Mirrodin's Core and charging it up. Gall has no turn two play and passes the turn, with Romans using his counter to generate black mana and bring out a Blind Creeper. Gall comes back with a Skyhunter Prowler . Romans sends his Creeper into the red zone and summons a Darksteel Ingot. Gall attacks with his Prowler and then summons another, passing the turn. The creeper attacks again and Romans plays out a Dawn's Reflection on his forest. Gall attacks for two and then plays out a Spire Golem, passing the turn.

Romans plays out a 5/5 Skyreach Manta thanks to his Reflection and then dumps out a Tangle Asp, passing the turn back across to Gall. Serum Visions allows Gall to take a look at his library and he follows up with a Bottle Gnomes and a Steelshapers Gift for Grafted Wargear. Iron-Barb Hellion joins the team for Romans who thinks for a long time before sending in his whole team. Gall elects to triple block the Hellion with his Bottle Gnomes, and Spire Golem and Skyhunter Prowler. Romans quickly decides to kill off the Spire Golem with all 5 damage and passes back the turn. 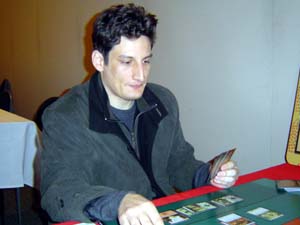 Gall attacks with his two Skyhunters and casts a Loxodon Mystic. Romans thinks again before sending in his Asp and his Manta, with one of the Prowlers diving in front to prevent any damage. Romans then plays out a Sylvok Explorer and passes the turn. The searched Wargear enters play on Galls side strapped to the Prowler and he attacks with his Gnomes and Prowler, dealing 5 damage to Romans. The Manta gets tapped down by the Mystic and Romans shatters the Wargear, sending in the Explorer and the Asp. "Was that a peel?" asked Gall, "Yeah that was a peel" admitted Romans openly. Gall then played out a Duskworker and passed the turn. The Mantra was once again tapped down in the attack phase and Romans dropped down a Whispersilk Cloak and equipped it to the Mantra. Gall attacked with his Duskworker and Romans decided that he was going to throw his Asp in front. Romans attacked back with his Manta as it could no longer be tapped down and then cast Death Cloud for 6 ending the game.