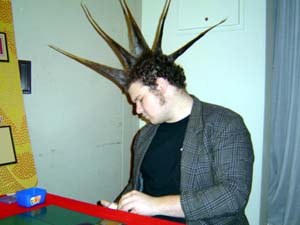 He is a young player who many have tipped to go all the way at this years nationals. He plays a lot of modo and is recognized as one of the best drafters in the whole of the country. Patty Robertson is one of the easiest people to spot in the whole room as he is sporting a large 5 spike Mohawk. Both players are coming into this game with 5-0 records.

He won the die roll and elected to play first. Robertson thought for a long time before finally deciding to send his hand back into his deck and look for a new 6. He started out with a Tel-Jilad Wolf and Robertson replied with a Krark-Clan Grunt and a Paradise Mantle. The Wolf enters the red zone and then He follows up with an Ouphe Vandals. The Grunt charges into the red zone for Robertson who summons another however Robertson is stuck on three land.

He sends his army into the red zone again and Robertson elects to take it on the chin dropping him to 14 life. He then plays out a Tangle Golem and passes across the turn. Still unable to find another land Robertson elects to do nothing and slides the turn back across . Across the red zone comes He again and Robertson puts his two Grunts in front of the Ouphe and the Wolf. He elects not to do anything before damage goes on the stack but Robertson plays Baton of Courage for one. Robertson then gives one grunt +1/+1 and gives the other +1/+0 and first strike. He uses Predators Strike to trample over the top of the first strike Grunt for 6 damage, dropping Robertson down to 6. He then summons another Ouphe Vandals. Robertson summons an Arcbound Worker and a Wayfarers Bauble before passing the turn.

He sends back across with his whole team and Robertson is forced to block off the Ouphe with his Arcbound Worker and the Tangle Golem with his Grunt. Robertson sacrifices the Paradise Mantle to give the Grunt first strike and +1/+0 however He has the Giant Growth for the Ferocious Charge for the unblocked creature to end the game.

Robertson elects to play first for Game 2 and gets things underway with a turn one Wayfarer's Bauble. He plays out an Auriok Bladewarden and Robertson searches for a mountain and plays out his Oxidda Golem sending it straight into the red zone. Another Auriok Bladewarden joins He's team and He sends the original Bladewarden into the red zone. A second Oxidda Golem from Robertson goes charging into combat with its buddy, dropping He down to 11 life. He plays out a Guardian Idol and passes the turn with Robertson casting an Arcbound Worker before combat and sends in the two Golems. Electing to block with one of his wardens He attempts to pump it up but it is met with a Shrapnel blast sacrificing the worker and killing off the blocker, with the modular counter onto the blocked Golem. He casts an Eternal Witness using up all of his green mana.

Robertson thinks for a while and casts a Vulshok Berserker, sending all three of his creatures into the red zone. He animates his Idol and uses the Bladewarden to block the Berserker, the idol to block a golem and the witness to block the other golem, the blade warden pumps itself up and the board is cleared with Robertson passing the turn. Making a good start to the clean board He plays out a Loxodon Mystic. 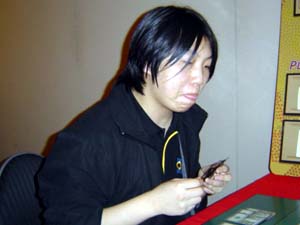 Robertson plays out the Spikeshot Goblin and passes the turn back. He plays out a Tangle Golem and passes the turn. The third Oxidda Golem comes into play for Robertson and at the end of the turn He taps it down with his Cleric. Both He's men come into the red zone and casts two Ouphe Vandals to cover his defenses.

Robertson pings He with his Spikeshot Goblin and casts a Goblin Brawler, passing the turn back again. He sends his whole team into the red zone with two cards in hand. Robertson goes into the think tank, Oxidda Golem blocks the Tangle Golem, Spikeshot blocks the Mystic and Brawler blocks a Vandal. Predators Strike and Ferocious Charge in He's hand are enough to force through the last 11 points of damage to end the game and the match.