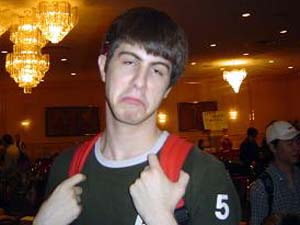 Zajdner is probably best known for his lack of an Inside Voice.

After doing no testing, Zajdner and visiting ex-American Champ Josh Wagener decided that he should play mono-black in anticipation of a huge blue-white presence this weekend. That intuition paid off big time, handing him a 3-0 performance in the first half of Day 1. Now he just needs to draft a spicy deck and he'll be well on his way to making Top 8 this weekend. Zajdner is confident of his chances. He's constantly drafting on Magic Online, and has played with Fifth Dawn a fair amount.

He was seated between Jason Howden and Francis Cormier and commented that the table was one to be respected. His first pack gave him the choice between Spikeshot Goblin and Betrayal of Flesh and he took the full time alloted before settling on the Goblin. Next up was Shatter, and then Deconstruct (over Granite Shard). The packs started getting thin right away. After a Silver Myr he took a pair of Krark-Clan Grunts, and then took a few artifact lands (one over Tel-Jilad Exile, a card Zajdner hates).

Unfortunately for him, Cormier had first-picked a Longbow over Shatter, and then proceeded directly to red after a third-pick Spikeshot. Worse, Howden had his eyes on red as well. As a result, Darksteel did not go well. Zajdner's first two picks were Spawning Pit and Arcbound Slith out of a pair of underwhelming packs. He got a Morningstar, but then got sent Echoing Decay, Chittering Rats and Screams from Within and resigned himself to playing swamps. He rounded things out with Tanglewalker, Viridian Acolyte and then Tangle Spider and hoped for the best.

Sadly Fifth Dawn was not coming to his rescue. He got a pair of Vulshok Sorcerers early despite a hiccup with a Goblin Brawler while he watched Vedalken Shackles go by. Skyreach Manta hit his pile fourth, but that was it as far as it went for exciting cards. The rest of his draft saw him pass Trinket Mage and Thought Courier while he stocked up on Grey Ogres. The only green cards he saw were Tyrranax and a lot of Tel-Jilad Lifebreathers.

Putting the cards out in front of him for deck construction, Zajdner was struck by how miserable his deck was. He left his Deconstruct and green filler in the board and threw out all his red and black cards. It totalled twenty-two, and that included such hits as Paradise Mantle. After Deconstruct brought him up to twenty-three, he couldn't find another card to include. He decided to run it with seventeen lands, but knew he was headed for an 0-3 performance. He conceded that if he got a lucky Skyreach Manta draw, or Spikeshot-Morningstar, he might be able to steal a match.