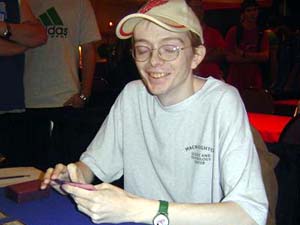 is the part of Canadian Nationals that internet writer Geordie Tait can't stand: The obligatory writer-as-player Feature Match. Ideally the cameras would be turned on him as he completed a 6-0 run on Day 1. He's already on his way with a first-round win. His usually impeccable fashion sense has been shelved in favor of a T-shirt lampooning fellow competitor and the Maritimes' best kept secret.

His opponent this round is Nick Page, also originally from out east but now living in Ontario while at university. Last year he came within a match win of Top 8, and since then has gotten onto the Team Pro Tour with some hooligans from school.

Tait opened with Cloudpost and Flooded Strand. Page had Strand and island, and went to search for a plains on his second turn. Tait asked him to hold up, and searched out his own land. Page, thinking that was the extent of it, went and got a plains. Tait interrupted and showed him Stifle. They called the judge who handed Page a warning for misrepresentation.

Next page tried a Talisman but Tait waas ready with Condescend, scrying himself up a Wayfarer's Bauble to power up his Temple of the False God. That's about when Page failed to play a third land. He shrugged.

While Page waited for his deck to help him out, Tait got busy with Eternal Dragon. Page managed to Stifle a cycled Decree of Justice, forcing Tait to Condescend and make only two Soldiers, but the Dragon hit play immediately after. Page played Talisman, then Ingot, and finally Wrath of God, but Tait's full grip included Mana Leak to take the game.

Tait swapped out his wrath effects, Wing Shards and Pulse of the Fields for Weathered Wayfarers, Engineered Explosives, Annuls and a Rewind. He sent back a mediocre seven, and was rewarded with six that included the mighty Wayfarer, insane when on the draw.

Page obliged him with a turn-two Talisman, allowing Tait to search up Cloudpost, but held up on land number three, playing instead a Darksteel Ingot. Tait was forced to put more lands on the table and turn off his Wayfarer.

"That mountain scares me. I thought he was playing some crappy March-Lattice deck, but now he's going to Obliterate my face." - Geordie Tait

Page played out a second Ingot as well as Darksteel Pendant, and then went for March of the Machines. Tait Annulled, untapped, and played a Dragon. Page showed him another March. Tait was suddenly on the wrong side of the race. Worse, he drew only lands. He succumbed to Page's indestructable army.

Page's start was an explosive cascade of two land, Talisman, then Ingot and Pendant. Tait accelerated with Bauble and they both played out lands. The waiting game did not favor Tait. Fortunately Page hadn't found an Obliterate, and he was able to hit ten mana. He cycled Decree of Justice and paused, wondering if he should make seven soldiers or just three and wait on Rewind. He went for the full amount, and Page showed him Echoing Truth. 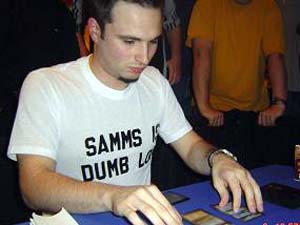 Tait, drawing an excess of Stifles, started the mediocre beatdown with Weathered Wayfarer. Page continued to dig. Eventually Tait found a second one to increase his "clock", but by then Page was ready to leave a Pendanted card on top of his library. He untapped and Obliterated.

Page had the March in hand, but when Tait dropped a Flooded Strand, he held back, trying to get more mana on the table. Two more lands let him bust out the March and Leak Tait's Leak. Two turns later it was over, and Tait revealed his quadruple Stifle draw.