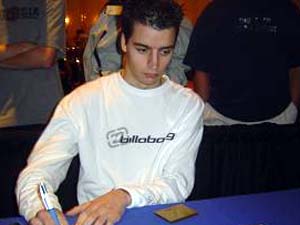 Boileau was playing Tooth and Nail. The Montreal player made a name for himself with Top 8 appearances in Grand Prix Detroit and Montreal as well as a Top 16 finish at Pro Tour Nice. Murray "The Mauler" Evans burst onto the Canadian Magic scene when he finished second at 2001 Nationals. He appeared on the Pro Tour six times before a Top 64 at Amsterdam, which was followed by a disappointing San Diego. Murray was splaying Affinity and both players were 2-0.

Murray was kicking things off and neither player had to mulligan. His first play was a turn two Cranial Plating with one artifact land and a Blinkmoth Nexus in play. His third turn saw him activate the Nexus to power up Frogmite into Thoughtcast. He played another Frogmite and an Ornithopter. He counted out to see if could dump a Myr Enforcer but his third land was a City of Brass and he fell one short.

Louie went straight to seven mana on turn three off of the Urza lands and played Oblivion Stone with four mana left to spare. Murray weighed his options and confirmed how much mana Louie had at his disposal. "You have four mana?"

"I have two lands," Louie answered evasively with a grin and added in a soft voice, "That make two mana each."

Murray steeled himself and activated his Blinkmoth and played a Myr Enforcer and plated up his Ornithopter. He sent everyone in and Louie fell to seven from the thirteen point attack on turn four. Louie untapped and Stoned away the board.

Murray attacked with his Blinkmoth and when Louie tried to Oxidize it he had a Mana Leak. Louie fell to five between the attack and sacrificing a Wooded Foothills for his Oxidize. The Mauler looked confidently at the Shrapnel Blast in his hand and waited for his next turn. Louie had designs on that turn though and took it for himself with a Mindslaver--a second Urza's Tower made that possible.

He saw a hand of Myr Enforcer and Shrapnel Blast and wished for a Ravager off the to but only got an Arcbound Worker. He played the Worker and Blasted it at the activated Blinkmoth Nexus. He untapped and played a Triskelion and Reap and Sowed away Murray's City of Brass. When he played a Ravenous Baloth on the next turn, Murray didn't waste any time and went to his sideboard.

Murray kicked things off with a Disciple and had an explosive turn two where he played Ornithopter, Seat of the Synod, Chrome Mox (imprinting Thoughtcast), drew two with Thoughtcast, and drew another two with Night's Whisper. He also banged in for one with Disciple. Louie just searched up an Urza piece on his turn two.

Murray's four cards drawn on turn two didn't give him much to do since two of them were Mana Leak and Stifle. He just attacked each turn with his cleric. When he played a second Disciple, Louie killed a Seat of the Synod with Tel-Jilad Justice in response. Murray attacked him to twelve on the next turn. When Louie sacrificed a Foothills EOT Murray failed to Stifle it and Louie had enough mana to play an entwined Tooth and Nail with mana up for any leaks. He put a Leonin Abunas and Platinum Angel into play.

Murray sighed and shook his head at his failure to Stifle. He played a Frogmite and passed the turn. Louie got in for four with the Angel and Eternal Witnessed back the Tooth and Nail. He also played an Oblivion Stone. Murray Shrapnel Blasted the Abunas EOT and hoped for a top deck.

He peeled his card slowly and revealed a Shrapnel Blast. He attacked with everyone and Louie chose not to block and fell to three. When he mana-burned for one to put a fate counter on the Angel Murray Shrapnel Blasted the Angel and Louie died from Disciple activations.

Louie was happy with his openers for the rubber game but Murray took his chances with six fresh cards and was content with them. Louie's sideboarded Pyroclasm went one-for-one with turn two Ravager. Murray came back with Worker, Disciple, and Frogmite. Louie just played his second Tower to accompany his Power Plant. 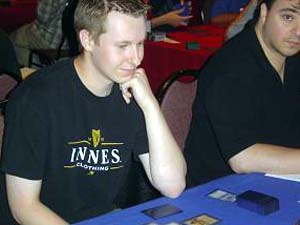 Murray got Louie to fifteen on his next attack but a Tel-Jilad Justice took out the Frogmite EOT and with an Urza's Mine on turn five--he had also Baubled into two green over the early turns--he was able to entwine a Darksteel Colossus and Triskelion into play. Murray did not even bother to untap.

Final result: Louie Boileau defeats Murray Evans two games to one. Louie advanced to the draft table as only one of eleven undefeated players.