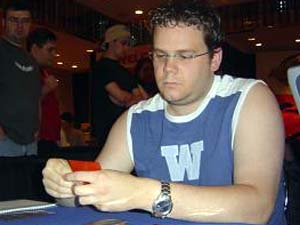 native, Michael Thicke is the editor of Playordraw.com an a regular contributor to Brainburst.com where he recently undertook a series of articles about drafting the MD5 format. One article was about taking dominant or submissive approaches to drafting. Mike claimed he took the latter at his draft table. "I would say this was s submissive draft. I try to force black or be put into white…I was put into white." Mike has a couple of money finishes at Grand Prix events in Oakland and Bangkok.

Francis Cormier is a promising player from Montreal. He has qualified for the Pro Tour five times although he has yet to make Day Two. At last year's Nationals he was all but locked in to make the Top 8 with an 8-1 record but dropped three straight to miss the cut.

The two players chatted each other up to get some glimmer of what the other was playing. Mike Thicke had no clue as to what was in Cormier's deck but Francis had an inkling of what Mike was playing. "I saw what Zajdner and Howden are playing so I can guess as to what you have."

Mike did not give away anything and looked to confirm Zajdner's complaints about his draft, "Is Mark's deck as bad as he says?"

Francis nodded, "It is not very good. I shipped it to him."

They both agreed that blue was underdrafted at the table. "I opened Vedalken Shackles and it went four or five stops down the line," complained Francis.

"There was super late Trinket Mage and Thought Courier."

Mike's turn two Arcbound Slith quickly reached 2/2 status when Francis opened on two Swamps and no play. Mike followed up with Goblin Brawler and his Slith became a 3/3. Culling Scales came down on the next turn from Cormier and Mike had to consider whether he should ride out the Scales or play into it.

He attacked the Slith up to a 4/4 and played Leonin Bola and Alpha Myr. Cormier took out the Bola on his upkeep and summoned a Dross Crocodile. Mike sent everyone into the portal reprint and Francis took four killing the Slith and temporarily growing the Myr. Thicke played Opaline Bracers with two Sunburst counters.

Francis played a Nim Lasher but it had to let the first-striking Brawler step by. Mike emptied his hand to play Skyhunter Patrol and Bracer it up. Francis Terrored it and Mike was crestfallen, "That's not good."

"No cards?" asked Cormier. He took out the Brawler and played Thermal Glider to attack for three with his Lasher. Mike had nothing. Francis ate his Scales and attacked for four. He added a Scavenging Scarab.

Mike found a creature and his Pteron Ghost picked up the Bracers. Cormier sent in the Scarab and added a Blind Creeper. Mike brightened after his next draw step and actually cracked for three with his Ghost. He played a Skyhunter Skirmisher and moved the equipment to the double-striking flier.

Francis looked over his board. The life totals were ten to six favoring Thicke. He needed to deal with the Skirmisher quickly. Failing that he needed an artifact to give his Navigator flight to chump for a turn. He attacked with the Creeper, Scarab, and Lasher. Thicke put his Skirmisher in the way of the Creeper and took five. Francis played a Goblin War Wagon and an Ion Storm.

Thicke sent in the Skirmisher and ate the War Wagon and bought a turn with his Navigator. He moved the Bracers over to his Ghost and had to withstand an attack from the Scarab and the Lasher. He put the Ghost in the way and took one from the Lasher. Cormier shrugged and picked up his cards.

Mike laughed at his good fortune to draw the Skirmisher. "Did you write, 'What idiot tries to play into Culling Scales?' I thought I was locked there. The Skirmisher was a pretty good draw."

Francis shook his head at his turn two Wayfarer's Bauble--he had kept a hand with five mana sources. Thicke's turn two yielded Alpha Myr and Cormier's third a Darksteel Ingot. Thicke's third turn play was a Leonin Squire but he had no trinkets to retrieve.

Cormier's Blind Creeper did not block and Mike was off to an early damage advantage. Skyhunter Patrol was put out as an offering to Terror but Cormier thinned with his Bauble instead. He sent his Creeper in and Thicke took three. Dross Crocodile and Conjurer's Bauble followed the attack.

Thicke sent in the troops and Francis Terrored the flier. He Baubled his Terror under his deck and chose not to block the weenies. Mike was stalled on four and played a Soldier Replica but could not activate it. Francis' Whispersilk Cloak made that a moot point and he put Mike on a three turn clock. 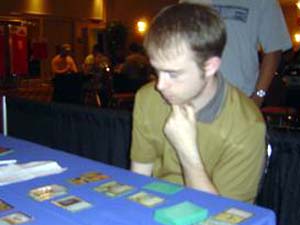 Mike had his own clock and struck back with Grafted Wargear on his Soldier Replica sending in the team. Francis blocked the Alpha Myr with Creeper. They traded and he took six. Francis could not crack back and had to leave the Crocodile to trade with the Replica. Thicke had the Barbed lightning to finish him off and Francis peeked at his next two cards and showed off his Serum Tank and Ion Storm as his next two draws.

Final result: Mike Thicke defeats Francis Cormier two games to one. Mike was now one of only half a dozen players with unblemished records.