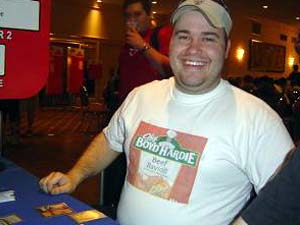 Boyd Hardie is probably best known as "that guy who took his shirt off". Two years ago in this very venue, Hardie won a make-or-break match to put him in the Top 8, and in celebration bared his ample carriage. All photographic evidence was destroyed. Today he's at 2-2 and staring down Gab Tsang, once one of Canada's best, who now wears a goatee, possibly because he is evil. Hardie is with a five-color special loaded with goodies (two Bringers!), and Tsang is a more traditional green-black.

Hardie kicked off with Skullclamp and then Thermal Navigator, which Tsang wasted no time in dispatching with Echoing Decay. Tsang started to hit with Clockwork Condor. Hardie busted out Auriok Salvagers. Tsang made a 2/2 Suntouched Myr and noticed a suspicious pile of gold coins on the table.

"Those aren't significant, right? They're not doing anything?" - Gab Tsang

Hardie untapped and showed him a Clearwater Goblet with four counters. Tsang motioned to read the card.

Tsang made a Mirror Golem that ate the Navigator. Hardie dropped Horned Helm and Soldier Replica, then equipped it with the Clamp. Tsang untapped and played Murderous Spoils.

"That was uncalled for." - Boyd Hardie

Hardie put down Mask of Memory, suited up his Tangle Golem with Mask and Helm, and swung in. Tsang double-blocked with his Mirror Golem and Myr and took no trample damage. Hardie made a Tel-Jilad Chosen and passed it back. Tsang axed it with Consume Spirit and played Tel-Jilad Wolf. Hardie played the all-star of his deck: Omega Myr. The spectators had a good laugh.

Tsang desperately tried to get enough power on the board to take a dent out of Hardie's burgeoning life total. Anodet Lurker joined his squad. Hardie had no play. Tsang played his last nonland card in hand, Grid Monitor. Hardie turned things around with Rain of Rust on the Clamp, then recurred it with his Salvagers. He used it to turn his Omega Myr into an Alpha.

It was about then that things started to go badly for Tsang. Despite bringing Hardie back down to twenty life, his back was against the wall in the course of two turns. First was Bringer of the Green Dawn, giving Hardie some serious inevitability. Then was Aether Spellbomb, which together with the Salvagers would leave Tsang with just the Grid Monitor. That was enough to earn the scoop.

Hardie had to mulligan a suspect five-lander that had no mountains to go with Vulshok Sorcerer. It did have Skullclamp, and Hardie almost kept it. His decision to send it back was not rewarded. He sat on two forests while Tsang played out Sylvok Explorer, then a 2/2 Suntouched Myr, and then Grid Monitor. Hardie found a third land in time to play a Thermal Navigator and lose it in combat to Echoing Courage. Two turns later he was dead, and revealed a hand of Pentad Prism and double-Bringer.

Hardie led with Tel-Jilad Chosen but was outclassed by Blind Creeper. He let his appreciation be known, then played a Soldier Replica and accepted three damage. Tsang played a Sylvok Explorer and passed it back. Hardie made a Pentad Prism and used it to get a second red for Vulshok Sorcerer, taking down the 1/1. Tsang tapped out for Fill with Fright, knocking out Hardie's plains and Rain of Rust and leaving him handless. He played an island off the top.

Tsang swung in with the Creeper again and traded with the Soldier Replica. Hardie knocked for a Bringer off the top, but was denied. He put down Aether Spellbomb, took three, and watched Tsang play the Big Monitor. Hardie sent off his Spellbomb and got a Vulshok Berserker into play. Tsang Bashed and did nothing. 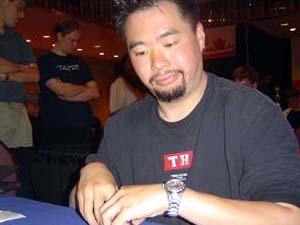 Finally Hardie's deck did him a favor. Bringer of the Black dawn came into play on his side. Tsang continued to swing, showing that he had Echoing Courage in hand. Hardie took it. He tutored up Clearwater Goblet and played it for four. His Berserker soaked up the next monitor hit. He was down to just six.

He rose to eight and tutored for Tel-Jilad Chosen. Tsang demolished it with Murderous Spoils. Hardie decided to stop tutoring and play it for the long game. He failed to draw a creature. Tsang untapped, and ripped his second Courage, taking the match.