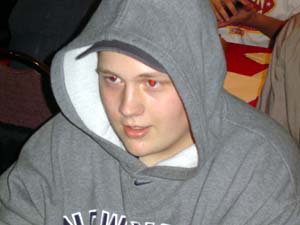 is Richard Hoaen's tournament to lose. After making the Top 8 of Canadian Nationals in 2002, Rich posted a Top 8 at Pro Tour Yokohama. He made the Canadian National team in 2003 and has had a solid Pro Tour season with a pair of Top 16 finishes in the two Limited Pro Tours.

Rich took one loss during the Constructed rounds and was looking to sweep through the limited rounds this afternoon and tomorrow morning. From that position he will likely only need to win one match. "If I lose it will be my first Limited loss at Nationals in three years. I lost a match once for misregistration but I have never taken forty points of damage in a Limited match."

Filip Hajduk is just happy to be here. The Polish immigrant lives in the suburbs to Toronto and earned his invite through his high rating. He dabbles in the PTQ circuit but largely earned his rating by grinding it out in his local shop. He also took his one loss in the Constructed portion and was battling with Rich to 3-0 the draft pod.

Hajduk ditched his opening seven and his next six allowed him to play Tel-Jilad Chosen on the second turn. Rich had a trinket less Squire but chose not to block. Filip's Nim Abomination dropped him to seventeen and clogged up the ground for a turn. Hoaen held back his Squire and popped out a Leonin Skirmisher.

Filip quickly sent both his men toward the red zone and when Rich put the Skirmisher in the way of the Chosen he had the Ferocious Charge to save it and scry for two. Rich pulled his card off the top and cheerfully announced, "That was a good draw." No Nim Abomination has ever faced off against Plains without being Arrested. Why would this game be any different?

Filip actually had an Elf Replica on his next turn but with only four lands needed to wait a turn to use it. Rich wasn't going to give that to him and entwined a Barbed Lightning to remove the Elf Replica and dropped his opponent to seven by the time he was done with attacking.

The game went on for two more turns but it was all but sealed with the Barbed Lightning.

Filip opened on Alpha Myr and Elf Replica. Rich's Leonin Skirmisher was taken out with Lose Hope and Hoaen was quickly at fourteen. He blocked up the ground game with a Den-Guard and Leonin Squire. Filip chose to keep his guys back and play an Ingot--he had only one source of black to that point. He used the Ingot to power out a Cackling Imp on the next turn and when it was Arrested he cashed in his Elf Replica to fly on in for two. He followed with another Cackling Imp.

Rich found a Morningstar for his Den-Guard and tried to race but with both players cracking for four--and Filip having the option to chump on the ground at any time--he could not catch up unless he drew something besides lands. He ended the game with eight in play.

Filip graciously took the win, "You had plenty of land that game."

"Yeah. I should have mulliganed."

Filip was gracious but excited as the 'one' was put next to his name on the feature match board to indicate his win. "Wow, I won my first feature match…game. That is very exciting for an amateur like me."

Rich was not prepared to end his streak at the hands of a player so happy with a single game win, "That is all you are getting."

Rich strummed his fingers on the table while deciding if he should mulligan or not. His hand had five lands and no creature spells. He sent it back and had to ponder the merits of a one-lander. He decided to keep it.

He missed his second land drop and Filip had his obligatory Alpha Myr. Rich found his second land a turn later and dropped a Leonin Squire and the two players each got in for two. When Rich played a Skyhunter Prowler, Filip showed Lose Hope and attacked into it. "So that's how it is…I'll take two."

Rich's lands kept floating to the top of his deck and a Krosan Berserker joined the party in the red zone. Filip 'prevented' a point of damage with Lose Hope and searched for a Forest to join his four Swamps. He found the Forest and Essence Drained the flier and got in for two. He was at sixteen and Rich fell to fourteen.

Rich bashed back to drop him to eleven and played a Skirmisher. Filip Consumed its Spirit for four and climbed to fifteen but had no attack. He had no blocks either when the Berserker grabbed a Morningstar and charged headlong into battle. Filip fell to ten and untapped to equip his Myr with Horned Helm and brace for combat on the next turn with Ferocious Charge. 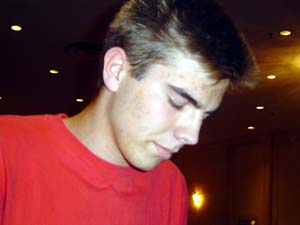 He killed the Berserkers but fell to eight from the Squire. Rich had a Loxodon Mystic but it was also Consumed for four and the Alpha Myr bashed in for three. It was twelve to eleven in favor of the rookie.
Rich found a Den-Guard and when it picked up the Morningstar the Abyss was online. Filip had to resort to chumping every turn. Rich found a Horned Helm to give his Den-Guard as a bonus but he apparently did not know it gave the creature trample since the game went on three turns longer than necessary because he didn't assign lethal trample damage.

Final result: Rich Hoaen defeated Filip Hajduk two games to one. Rich advanced to Day Two with his Limited streak intact and in an excellent position to make the Top 8 of Nationals for the third year running.